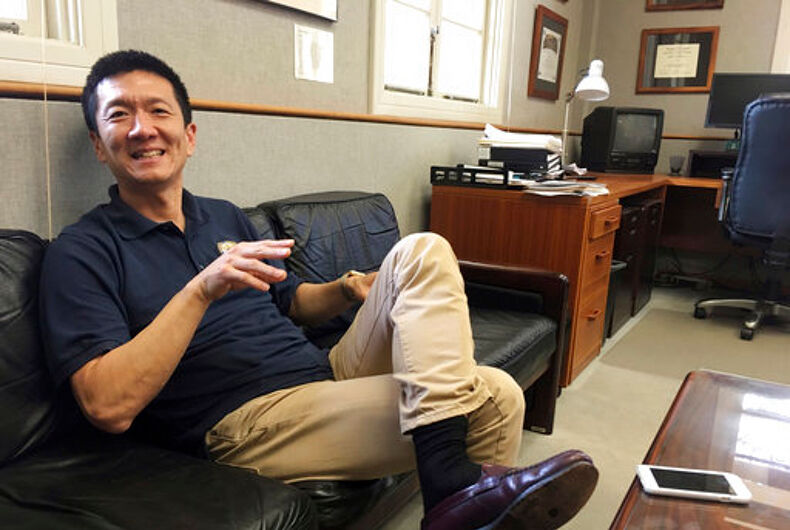 HONOLULU (AP) — Growing up in Washington state, Douglas Chin says he was the stereotypical “smart Chinese kid that got straight As.” His parents taught him not to stick out too much and used to say “don’t poke the lion.”

So when Chin, now the Hawaii attorney general, was deciding on whether to challenge the Trump administration’s latest travel ban, he understood those who said that it wasn’t the state’s fight.

But the Stanford University-educated lawyer stepped into the spotlight, making Hawaii the first state to challenge President Trump’s revised travel ban — and convince a federal judge to temporarily block it before it took effect.

His motivation was personal, he said. Chin said he felt as if he was invisible during his time in an overwhelmingly white suburban Seattle high school, and wanted to fight for an invisible minority in Hawaii: Muslims.

“It really hits home with me,” he said. “It worries me about this society and what’s happening.”

Before his appointment as attorney general, Chin, 50, was Honolulu’s managing director (who would serve as acting mayor when the mayor was out of town) and a prosecutor. People who know and worked with him say he is nice, smart and a fast walker.

Some, however, criticized him for challenging the travel ban.

“Let’s allow the big states with more resources to fight this issue,” Republican state Rep. Gene Ward said in a statement. “My sense is that the people of Hawaii would rather see potholes fixed rather than trying to lead the nation against an executive order.”

Those who have worked with Chin say the reason he is fighting the ban is simple: He’s kind.

Jean Ireton was a fellow Honolulu prosecutor with Chin, who started out in traffic court. He had “some of the toughest, most god-awful trials that we had there,” she said.

Those kinds of cases showed her the worst in humanity, she said, but Chin didn’t see them that way: “He’s just a kinder person than I am. I don’t have as much faith in people as he does.”

Ireton and Chin have differing views on the travel ban. “I do have a problem with the amount of vetting they’re able to do in those countries,” she said. “Doug sees it from a people perspective. He sees it from people who are suffering.”

U.S. District Judge Derrick Watson on Wednesday blocked the federal government from enforcing its ban on travel from six mostly Muslim countries and its suspension of the nation’s refugee program.

The judge agreed with Hawaii that the travel ban amounts to discrimination based on nationality and religion.

Trump called the ruling an example of “unprecedented judicial overreach” and called his new travel ban a watered-down version of the first one. He said the order was a necessary measure to prevent terrorists from entering the country.

For Chin, the issue of immigration is a personal one. He is named after the Christian missionary doctor who sponsored his Chinese parents’ immigration to Washington state, where Chin was born.

“I think that’s where you probably can catch a spark of a personal sense of duty about this whole travel ban,” he said, describing his parents emigrating in 1957 at a time when U.S. immigration policy still imposed nation-based quotas.

Chin eventually moved to Honolulu in 1989 as part of a job transfer with IBM, and was exposed to Hawaii’s diversity. “All of a sudden I wasn’t in this place where I felt invisible anymore so that was really empowering,” he said.

Chin’s career after IBM took him to the University of Hawaii law school and then various stints in the Honolulu prosecutor’s office and private practice.

On a bookshelf in Chin’s office is a newspaper front page from a murder conviction he won in 2010. A 15-year-old boy who was tried as an adult and convicted of murdering his 51-year-old neighbor is one of Chin’s most memorable cases.

Near the shelf are portraits of Chin’s children and wife, who is white and from New York. He describes his daughter, 18, and son, 16, as “hapa,” a Hawaiian term that locals use for mixed-race people.

Former Honolulu prosecutor and former mayor Peter Carlisle recalled first meeting him at Chin’s church while Carlisle was campaigning. Carlisle said he was so impressed with Chin’s public speaking, he told him to look him up if he ever needed a job.

Chin attends Oahu Church of Christ, a nondenominational Christian church that meets in rented spaces at the university or an elementary school. At church, Chin arranges music and sings acapella — he has perfect pitch, he notes sheepishly.

He found the time to go to Sunday services the week of the Honolulu hearing. After the hearing, Chin stopped at his office and then to Waikiki where he was hosting a meeting of the Conference of Western Attorneys General because he’s the group’s chairman.

Chin has also spent a lot of time giving interviews to news organizations nationwide about his lawsuit. Part of the reason he does that is to educate — even those who live in Hawaii.

“It’s a no-brainer why we have to object to this. I totally know how there’s another segment of the population that to them it just doesn’t connect,” he said. “What does the Middle East have to do with Hawaii?”

The answer, he said, is Hawaii’s some 5,000 Muslims are the invisible minority and Chin knows first-hand what that feels like.

“People in Hawaii don’t know how to process a Muslim other than what they see on TV,” he said.