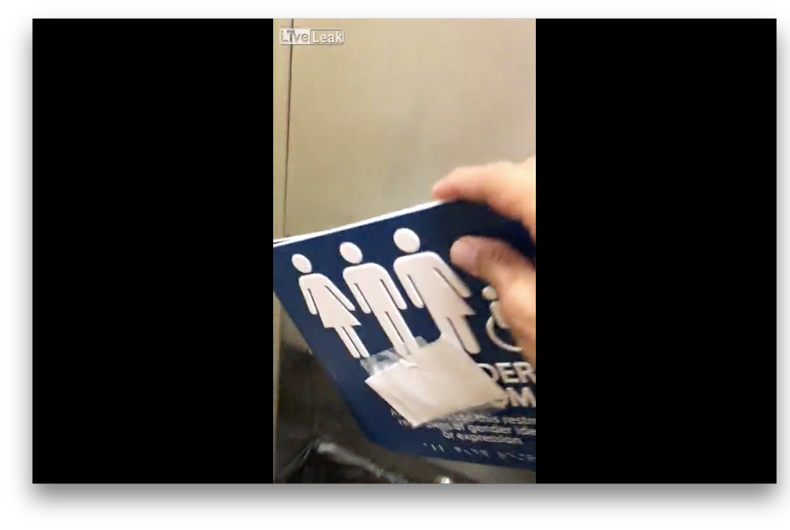 A California man filmed himself tearing down signs for all-gender restrooms.Photo: Screenshot via LiveLeak

In a brief video titled “my daughter wont share a restroom with any man,” a father tears down signs for all-gender restrooms while ranting about transgender people.

Posted to LiveLeak by user “charlieinthebox,” a self-described “patriotic miscreant” from Fresno, the video starts out by showing two signs for gender neutral restrooms. One sign has a piece of paper taped over the words “All Gender Restroom.”

The man proceeds to rip the signs of the door and throw them in the trash in one of the bathrooms.

“That’s what I think about transgender people sharing them bathrooms when there’s only male or female,” he says.

After flushing a urinal for dramatic effect, he adds, “I guess women go pee in here too, right?”

The video was posted on Saturday, and has since been viewed more than 68,000 times, but has received just 154 up-votes. Some of those showing their support for the video include people with usernames like RefuGeesusChristgohome, morningwood, Abuzive, and “Not a Homosexual” SteveTheQueen.

Rep. Steve King: ‘We can’t restore our civilization with somebody else’s babies’