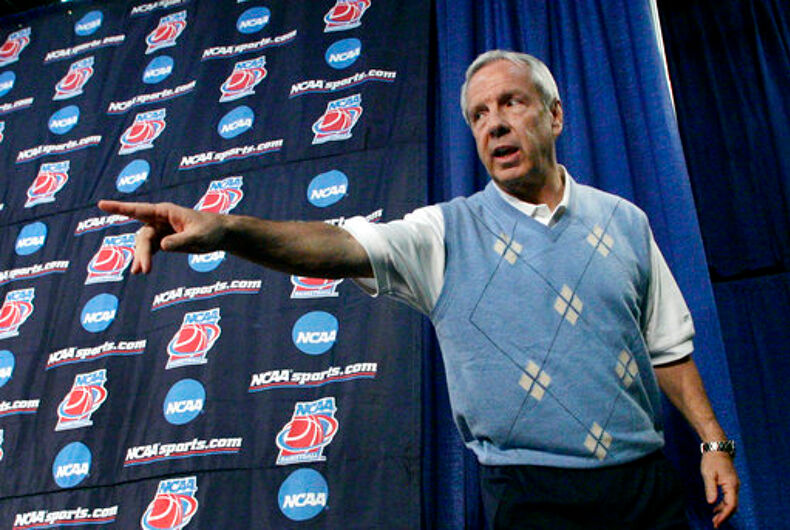 FILE - In this March 16, 2007, file photo, North Carolina coach Roy Williams arrives for interviews with reporters in Winston-Salem, N.C. North Carolina _ which has hosted more NCAA Tournament games than any other state _ was stripped of opening-round games in Greensboro due to passage of a law limiting the protections for LGBT people. Hall of Fame coaches Mike Krzyzewski with Duke and Roy Williams have both spoken publicly against the law in recent months.Photo: AP Photo/David J. Phillip, File

GREENVILLE, S.C. (AP) — Times have changed in the Carolinas. Everyone knew this day was coming, but now it’s a reality.

The NCAA Tournament, a spring fixture in basketball-crazed North Carolina, is tipping off in South Carolina on Friday. Because of state-level politics, the NCAA no longer considers North Carolina a suitable host, while a political move has put South Carolina back in the governing body’s good graces.

North Carolina was stripped of opening-weekend games set for Greensboro due to a law limiting protections for LGBT people. Instead, tradition-rich state powers Duke and UNC start play Friday in Greenville, South Carolina.

Moving the game to South Carolina would not have been an option two years ago due to the presence of a Confederate flag on the state’s capitol grounds. But lawmakers took it down in 2015.

“I would hope that North Carolina should have learned from our lesson,” said South Carolina Sen. Darrell Jackson, a Democrat and pastor of one of the state’s largest black churches. “That is, the longer you prolong this, it doesn’t change, it’s just going to be harder. I think it’s worse because they had it.”

The NCAA pulled seven championship events from North Carolina last fall after passage of the law — known as HB2 — requiring transgender people to use restrooms at schools and government buildings corresponding to the sex on their birth certificates. It also excludes gender identity and sexual orientation from local and statewide antidiscrimination protections.

The NCAA only pulled events from pre-determined sites. These events are awarded to sites regardless of which teams compete, and the NCAA’s decision doesn’t impact teams which earn homecourt advantage. That is why Duke’s women’s team is hosting an NCAA tourney game in Durham this week.

UNC coach Roy Williams is disappointed with the situation.

Along with the NCAA, the NBA pulled its all-star game from Charlotte, which also lost the Atlantic Coast Conference’s football championship game. Entertainers such as Bruce Springsteen and Pearl Jam have also canceled performances in the state.

“South Carolina is known for great basketball and this is a great town, so we feel really good about being here,” said Krzyzewski, coach of the East’s No. 2 seed. “It would be nice if our state got as smart and also would host not just basketball tournaments but concerts and other NCAA events. But maybe we’ll get there in the next century, I don’t know, we’ll see.”

Finding a resolution recently intensified due to concern the NCAA will pass on North Carolina through 2022 when it announces its next round of pre-determined sites. But attempts toward repeal or compromise have failed amid partisan distrust.

For Arkansas, Seton Hall and Marquette, when it comes to the games, playing in Greenville instead of Greensboro is a road game either way. The team benefiting the most on the court might be South Carolina. Senior guard Duane Notice said the Gamecocks are happy for the chance to play in their home state.

But lawmakers say this isn’t about home court advantage.

“I hope people don’t want to repeal House Bill 2 just because they want to have their basketball team” playing in the state, said North Carolina House Minority Leader Darren Jackson, a Democrat. “I hope they recognize that this is terrible for our state. … There’s no single thing we can do that would improve our economy more, in my opinion, than repealing House Bill 2.”

The North Carolina Sports Association estimates more than $250 million in potential economic impact from 130 event bids submitted to the NCAA.

Still, many supporters stand firm despite the losses of marquee events.

Republican Rep. Mark Brody filed a bill this week seeking to file complaints with the IRS challenging the tax-exempt status of the NCAA and ACC, accusing them of using “economic retaliation” by withholding events.

“When somebody says, ‘do you regret doing HB2?’ No and absolutely not, I do not regret it,” Brody said, adding it made decades-long policy into state law.

That was a year after the NCAA banned South Carolina after its legislature moved the Confederate flag from atop the Statehouse to a Confederate soldier’s monument on the grounds.

But after Dylann Roof killed nine black churchgoers at a Bible study in June 2015, lawmakers moved to take down the Confederate flag, a symbol Roof waved in pictures. A federal jury convicted Roof of murder and he has been sentenced to death.