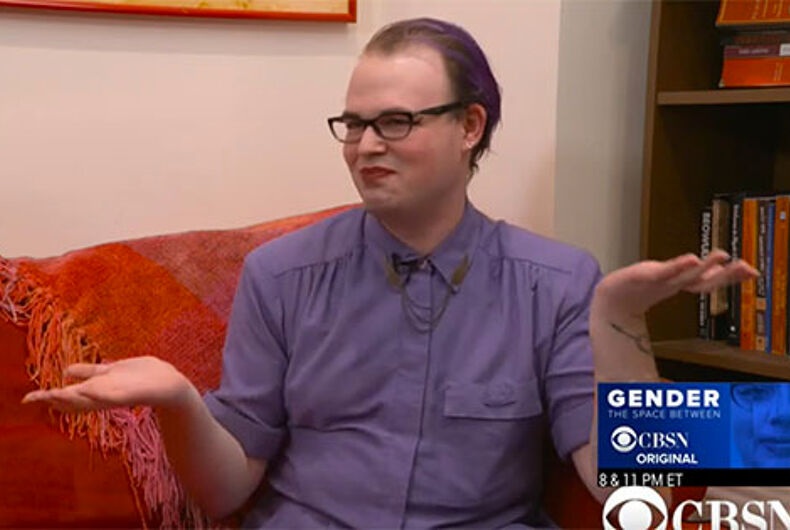 CBS, the network television news division once known as the most conservative of “The Big Three,” the house that Edward R. Murrow and Walter Cronkite built, unveils a documentary Monday night that seeks to explain and explore the difference between sexual attraction and gender identity.

It’s called Gender: The Space Between, and it debuts at 8pm, with a webcast to follow on the network’s website.

Jumping on the bandwagon that Diane Sawyer and Katie Couric have built to draw viewers who are curious about gender differences, transgender identity and gender non-conforming individuals, Alex Wagner will guide viewers in what the network’s website called “Gender Terminology 101.”

Critics from the right have already pounded CBS for “peddling LGBT propaganda.” Without the benefit of having seen more than a preview online, NewsBusters denounced the documentary that it said was “promoting the radical left’s perverted LGBT agenda.”

“The articles’ liberal narratives, devoid of any conservative counterbalance, provided another example of the media’s activist approach to covering the revolution to redefine gender and normalize all permutations of sexual proclivity.”

Sj Miller, a transgender scholar at New York University who made headlines last August when Miller was confronted by police on an Oklahoma campus despite Miller’s role there as an educator, is one of the experts interviewed by CBS.

Judge for yourself tonight on CBS at 8pm. The network is also livestreaming the documentary.