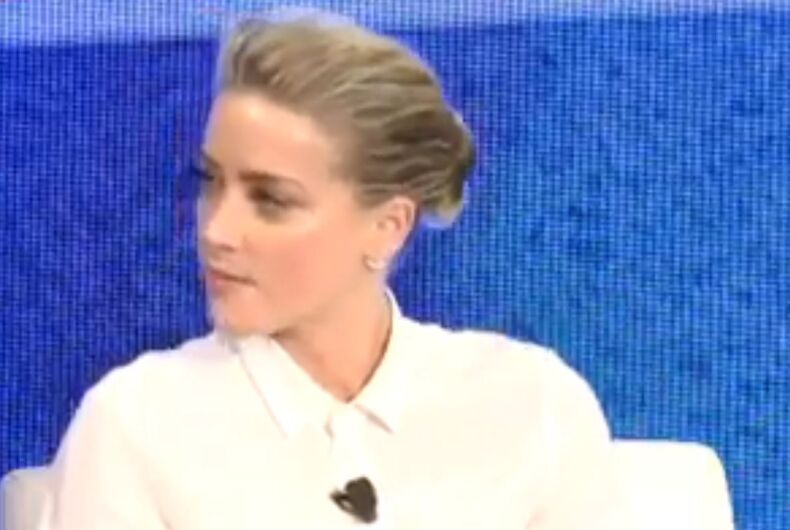 Amber HeardPhoto: Screenshot via The Economist

Hollywood has a diversity problem, according to bisexual actress Amber Heard. The Magic Mike XXL star recently spoke at the The Economist’s annual Pride & Prejudice conference.

At the annual event, which describes itself as a “global discussion on why LGBT-inclusion is good for business,” Heard tackled the film industry’s struggle to keep up with the mainstream with regard to diversity and inclusion, in terms of gender, sexuality, and race.

“The truth is, Hollywood needs to change very quickly if it’s going to still be relevant at all, because it has a lot of catching up to do just to mainstream society,” she said. “It’s filled with people who are allergic to taking risks and putting themselves out there, so what you see is a very formulaic approach, ‘Well this works because everyone loves the guy saves the world, kisses the girl, and lived happily ever after,’ and it follows not just a very typical heteronormal pattern, but it’s also tilted towards white men. Let’s just say diversity is not Hollywood’s strong suit.”

She blames this slow pace of change, in part, to the reluctance of Hollywood celebrities to be openly gay, lesbian, or bisexual. It’s not that the industry is without LGBTQ actors and actresses, even high profile ones, they simply aren’t interested in sacrificing that piece of their privacy.

“I have a lot of lesbian and gay friends that are very well-known working actors and the status quo is just that you answer ‘my private life is my private life,’ and it’s used as this kind of, not a euphemism, but it’s a nice way to dodge it,” she explained. “And I didn’t see any worth in that, because while that is true, while my private life is valuable to me, I knew that being in Hollywood I had a particular responsibility.”

Heard, who came out in 2010, talked about the challenges she faced out on that limb.

“In 2010 I was taking meetings with people, at that time my career was taking off in a different way and I was not just acting, I was being cast and leading movies as the romantic lead, and everybody around me said ‘as a romantic lead, as a leading lady, there’s a certain amount of wish-fulfillment you need to fulfill, you need to be able to sell, and how is anybody gonna invest in you romantically if they think you’re unavailable?’” she recalled, “and I rolled my eyes at that and I said watch me do it, and I did.”

It wasn’t easy being a trailblazer, she said, but it’s less lonely now.

“It was not easy—I was the only one working in this way, so it was definitely difficult because nobody had done it,” Heard said. “But I stand here now in 2017 amongst many of my working romantic leading lady peers who are out, and living completely fluid, out lives, which is even more difficult I think than being a part of one particular label or not, and I’m one of many now.”

While it’s true that more high-profile actresses have come out as lesbian, bisexual, or fluid, there’s still a deafening silence among the men.

“If women can do it and we can change the way that this conversation is had on a large scale, then men should be able to do it with as much or more efficacy,” Heard said, noting the advantage men’s societal privilege and power offer them. “I mean…if white men can’t change this, then I don’t know who can.”

She believes more actors coming out could represent a sea change.

“If every gay man that I know personally came out in Hollywood tomorrow,” she said, “then this would be a nonissue in a month.”

Life
Coming Out, Hollywood, out actors, The Economist