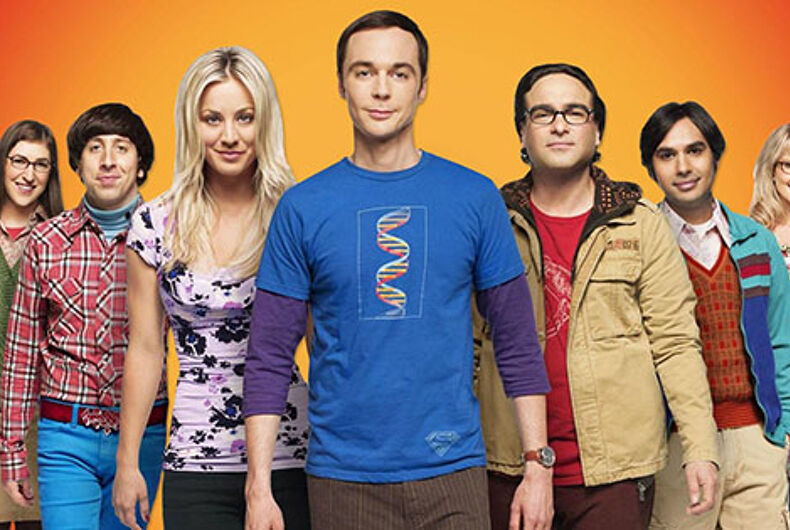 The five original cast members of TV’s The Big Bang Theory are apparently applying Newton’s law of Inertia to the concept of pay inequity as it directly impacts the salaries of two costars on their show, actresses Mayim Bialik and Melissa Rauch.

An object at rest stays at rest and an object in motion stays in motion with the same speed and in the same direction unless acted upon by an unbalanced force.

The force in this case was out actor Jim Parsons, Johnny Galecki, Kunal Nayyar and Simon Helberg, who Variety reports have teamed-up with their female costar Kaley Cuoco. They agreed to give back $100,000 each of their million-dollar-an-episode paychecks so that Warner Bros. and CBS can, in theory, pay more to Bialik and Rauch. The trade paper reported the actresses currently earn 80-percent less than their costars.

And the success of the show provides the stars with some heft: The Big Bang Theory is the number one comedy in America, raking in the most viewers in the highly-prized demographic of 18-to-49-year-olds. The average episode is seen by an estimated 20 million viewers. According to Variety, “The show has grossed over $1 billion in syndication for Warner Bros alone.”

The show is up for renewal, and talks that began late last year have stalled over the salary dispute. So when the original cast members agreed to take a $100,000 cut in salary for the prospective 11th and 12th seasons, that potentially freed-up $500,000 to fund raises for Bialik and Rauch.

Splitting that in half would rise the actresses’ salaries to nearly $450,000 an episode, or more than $21 million for the two-year, 48-episode deal. But as Variety reported, what’s not clear is whether the two will hold out for equal pay to their costars, or for something at least closer to parity with the other actors. Negotiations on Bialik and Rauch’s deals began this week.

Bialik and Rauch have become integral to the show, with Rauch’s character recently having a baby with Helberg’s character. Fans would be unhappy if they were to leave the show, and the stars can use that popularity as leverage in their negotiations.