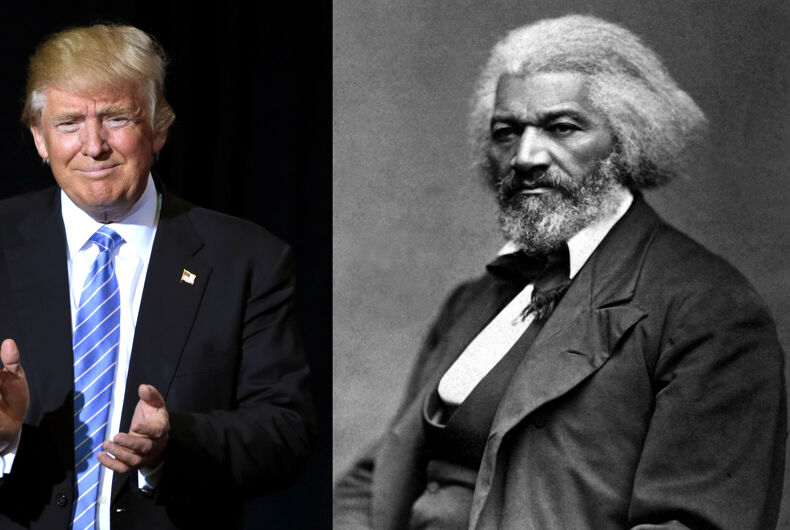 February is Black History Month, a national annual observance since 1926, which honors and celebrates the achievements of African Americans.

To commemorate its start President Trump hosted a “listening session” at the White House that left listeners scratching their heads wondering if he knew that Frederick Douglass, a former slave and abolitionist, died in 1895 — and that 2018 will be the bicentennial of his birth.

“Frederick Douglass is an example of somebody who has done an amazing job and is being recognized more and more, I notice,” Trump said.

While many expected that White House press secretary Sean Spicer would clarify what Trump meant regarding Douglass, Spicer’s comments left some wondering if  he, too, is unclear on the matter of Douglass’ mortality.

The remarks from both Trump and Spicer could have been an episode of “Drunk History,” a TV comedy series where an inebriated narrator fumbles recounting historical events, illustrating the need for Black History Month.

And, if Dr. Carter Woodson, the Father of Black History, were alive today, he would’ve been troubled by their remarks. However, it’s not just African Americans troubled by Trump’s lack of knowledge; it’s across various racial and ethnic groups.

“He’s embarrassing!” Scott Kearnan, the Boston Herald‘s white food editor stated. “It’s generally revealing of his lack of interest in the history of this country and civil right struggles in particular.”

Sue O’Connell, publisher and editor of South End News and Bay Windows, and host of NECN’s “The Take with Sue O’Connell,” who is white, brought to my attention that Trump is not alone in not knowing basic black history. She reminded me when Libertarian presidential candidate Gary Johnson was being shepherded to a room at a convention center named after Harriet Tubman, and asked the aide “Who’s Harriet Tubman?”

“These two men, Trump and Johnson, regardless of their opposing political views, had no idea who Harriett Tubman was,” she said. “Trump enthusiastically is learning about Frederick Douglass for the first time.”

Since its inception, Black History Month has been the subject of criticism from African Americans as well as from other races and ethnicities. Many African Americans, in particular, are insulted that the shortest month in the calendar year is solely focused on the histories and achievements of a people who have been dragged to these shores since 1619.

When Obama was first elected, Millennials of all races — but particularly African-Americans — whose ballots help elect the country’s first African-American president revealed that celebrating Black History Month seem outdated to them. Many of them viewed the celebration as a relic tethered to an old defunct paradigm of the civil rights era and a hindrance to all people moving forward.

Obama’s candidacy was thought to have marshaled in America’s dream of a “post-racial” era where race had finally become a “non-issue.” And Obama’s election encapsulated for them both the physical and symbolic representation of Martin Luther Kings’ vision uttered in his historic “I Have a Dream” speech during the 1963 March on Washington.

“King said don’t judge by the color of our skin, but instead the content of our character,” Josh Dawson, 26 of New Hampshire reminded me.

In proving how “post-racial” Obama was as a presidential candidate, Michael Crowley of The New Republic wrote in his article “Post-racial” that it wasn’t only liberals who had no problem with Obama’s race but conservatives had no problem also, even the infamous ex-Klansman David Duke.

For years, the celebration of Black History Month, especially among white conservatives, has drawn ire around “identity politics” and “special rights.”

With the alt-right movement afoot and Trump removing white supremacist groups — Ku Klux Klan, Identitarians, Identity Christianity, Neo-Nazis, and Neo-Confederates, to name a few — from the Countering Violent Extremism program to profile Muslims these groups as well as many white Trumpian conservatives are now more emboldened than ever to not only contest the celebration of Black History Month but to also insist now on a white history month.

This push back against Black History Month by whites has been going on for decades, and shown how some court decisions bolstered the resistance.

During the George W. Bush years, we saw the waning interest in “identity politics,” creating both political and systematic disempowerment of marginalized groups — like people of color, women, and LGBTQ people — and a disinterest in their histories and struggles. We also saw the gradual dismantling of affirmative action policies, like in 2003 when the Supreme Court split the difference on affirmative action, allowing the Bakke case on “reverse discrimination” to stand.

The creation of Black History Month was never intended by Woodson to be divisive but rather to educate all Americans of African Americans’ contributions to the United States. In so doing, it aims to engage and invite informed “listening sessions” on the histories all minorities as integral to American History.