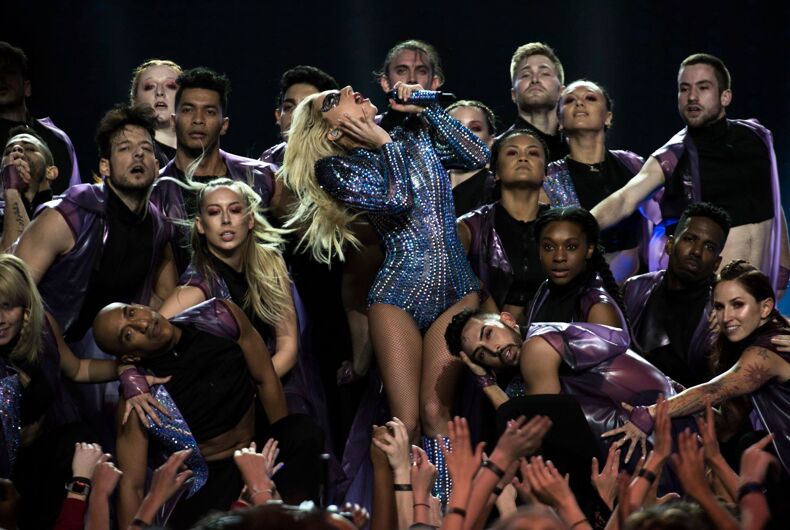 Lady gaga rehearses for the Super Bowl in Houston.Photo: Mason Poole / via Facebook

With more than 100 million people watching at home and in the stadium, the Super Bowl stage makes quite the soapbox. So it’s understandable that some expected Lady Gaga — a bisexual pop star who has been outspoken about social justice issues — would make a political statement.

But Gaga, who was a vocal supporter of Hillary Clinton, made it clear in a radio interview Friday that she was sticking to the music and hoped to unite, rather than divide.

“The show is coming from my heart to everyone in America that I love so much. This is my country and I’m proud to be a pop star from this country. I’ve travelled the whole world and it’s something special to be from America,” she told Atlanta’s 98.5 KLUC. “I want people that watch the halftime show to feel the greatness of the USA.”

Gaga said it was precisely because she has that big stage that she feels obligated to promote unity.

“Because I know I have a bigger stage that day and that I’ve had a lot of really big stages that I’m grateful for, you know the power of your voice,” she explained. “And I would like to use to that voice to bring people together on that day. Saying anything divisive would only make things worse. And that’s just not what I want for my country.”

Despite the hopes of some of her fans, Gaga kept her performance above reproach, opening with a patriotic medley including “God Bless America” and “This Land Is Your Land,” emphasizing that the United States is “one nation, indivisible.”

After her red, white, and blue intro Gaga performed “Poker Face” before launching into her anthem for equality “Born This Way.” In another subtle statement, she made sure to include the verses that call out different communities, including Lebanese and transgender folks.

Don’t be a drag, just be a queen
Whether you’re broke or evergreen
You’re black, white, beige, chola descent
You’re Lebanese, you’re Orient
Whether life’s disabilities
Left you outcast, bullied, or teased
Rejoice and love yourself today
‘Cause baby you were born this way

While it wasn’t anything extra, the mere fact that she uttered the words lesbian, gay, bisexual, and transgender on the Super Bowl stage, with hundreds of millions of eyes on her — including notoriously anti-LGBTQ Vice President Mike Pence — is huge.

Gaga went on to sing “Telephone” before pausing to answer the unasked question of whether or not she’d turn her stage into a soapbox.

Thousands rallied against Donald Trump at the Stonewall Inn