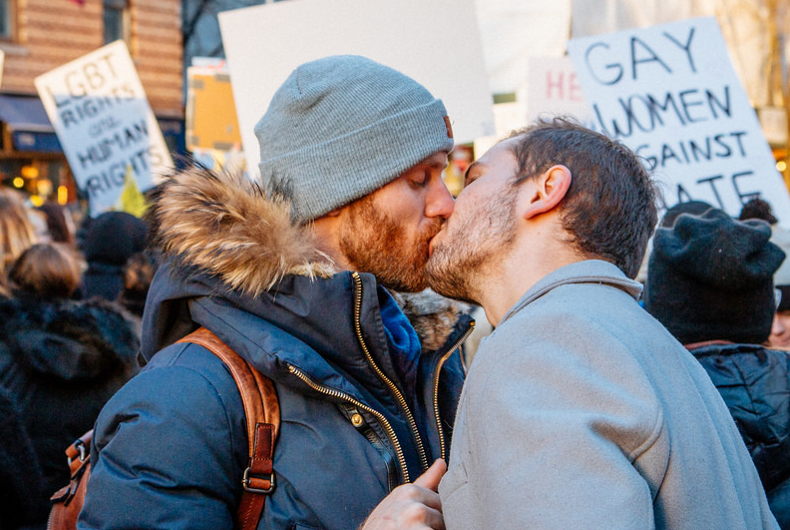 A rally in solidarity with immigrants and refugees was held at the Stonewall Inn Saturday, drawing as many as 20,000 participants who protested against the Trump Administration.

The stated purpose of the rally was solidarity with immigrants and refugees. One participant told ABC News, “A lot of my friends are going to be affected by Trump’s immigration policies.”

Some protestors also had LGBT rights on the mind. “I’ve been trying to block out what Trump’s been doing because it’s so depressing, but they are trying to legalize discrimination and that really makes me sad and angry, there has been so much bad news when he has been in office for such a short time,” one protestor told The Guardian.

The rally was organized by city council member Cory Johnson whose district includes Chelsea. He called the possible “license to discriminate” executive order “disastrous.” “He may not have come out yet and said he wants to persecute gay people but Trump has appointed senior people and cabinet members who are anti-gay and his collusion with the religious right is the equivalent of making a pact with the professional anti-gay forces,” Johnson said at the rally.

There were also messages against the Trump Administration generally.

The focus of the rally, though, was on support for immigrants. Mother Jones‘s James West said that most of the people he spoke to talked about the rights of immigrants. “The LGBT community is across every spectrum. We’re Muslim, we’re Hispanic,” Jaimie McGovern said.

Speaker at LGBT solidarity rally at Stonewall: "I am a woman. I am brown. I am queer. I am an immigrant. And I am here to stay." pic.twitter.com/9KdgXjvZu6

14 minutes ahead of time, chants have begun at the NYC #LGBTSolidarityRally in front of #Stonewall pic.twitter.com/eSlqTT3ubN