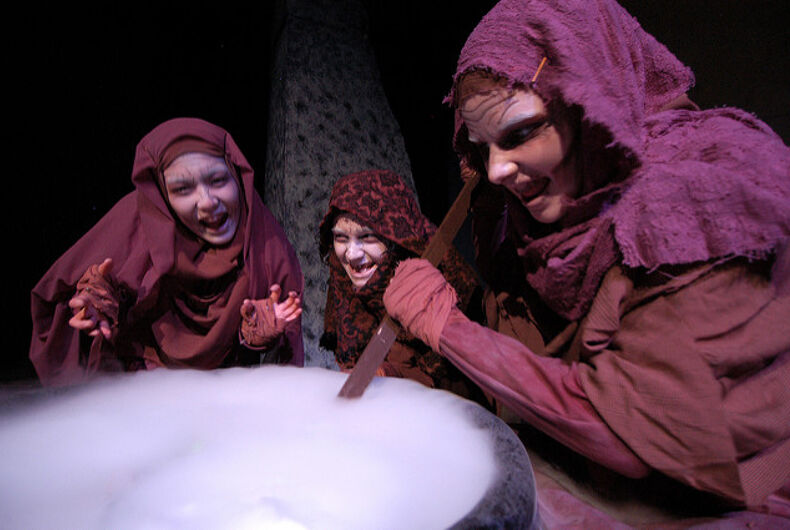 Witches have it in for President Trump.Photo: Jeff Hitchcock on Flickr, CC 2.0.

President Donald Trump has a lot of problems at the moment. His White House leaks so reliably that even the meeting about stopping leaks leaked, a court temporarily blocked his travel ban against seven majority Muslim countries and his approval rating is dismal.

The talking heads in the far right media landscape think the real trouble facing Trump is not his own incompetence and the resulting fallout from his administration’s poor attempts at governing, but, rather, witches.

Witches are casting spells en masse, it seems, with the intent of taking down our president. Apparently they have a decent chance of meeting that goal if the right’s paranoia is any indication of the seriousness of the situation.

American Family Radio’s Bryan Fischer took to the airwaves on Friday to warn that the left is making the culture war into a spiritual one and that conservatives are going to have to pray the demons away. God is not powerful enough to defeat some leftist inspired dark spirits without a lot of convincing, it would seem.

“We have the left declaring all-out spiritual warfare,” Fischer said on his show. “In other words, they’re making this culture war a spiritual war. This is now a battle between the forces of darkness and the forces of light and they’re the ones who have initiated it, they fired the first salvo in this spiritual war and so we need to respond to this.

“This is an evil day. The other side, they’re throwing everything they have into the breach, including now, demons. I mean, realize what the left is doing now in this battle over the future of our country, they are throwing the very demons of hell at those who are trying to represent what is good and best and right for this country.”

Fischer wrote a piece warning of the war being waged on Trump for the American Family Association, where he declares that our new president is “now the direct object of curses being woven against him by covens all across the country, who began their crusade last Friday night at midnight by joining together to curse President Trump. They intend to repeat this ritual on every waning crescent moon until the demons of hell hound him out of office.”

Too smart to believe in such silliness? Doubt at your own risk, says Fischer.

“Many so-called intellectuals pooh-pooh the idea of demonic spirits and curses as superstitious mumbo-jumbo. But Jesus, who knew more about the spirit world than all the intellectuals in the world put together, was under no illusions about the existence of the underworld and the mission of dark spirits who attack human beings.”

Fischer is not the only conservative pundit to go off reservation, looking for that which goes bump in the night.

Pat Robertson took on the topic on Monday during his show 700 Club, where Robertson suggested Christians not only resist the curses but to “send them back where they came from, send the curse back to those witches.”

World Net Daily also warned of last Friday’s mass hexing of Trump by witches, and has also claimed Lana Del Rey was in on it.

Speaking of celebrity “witches,” according to Alex Jones of InfoWars, Lady Gaga’s Super Bowl halftime show was a satanic ritual.

Someone please get these poor little snowflakes a safe space.