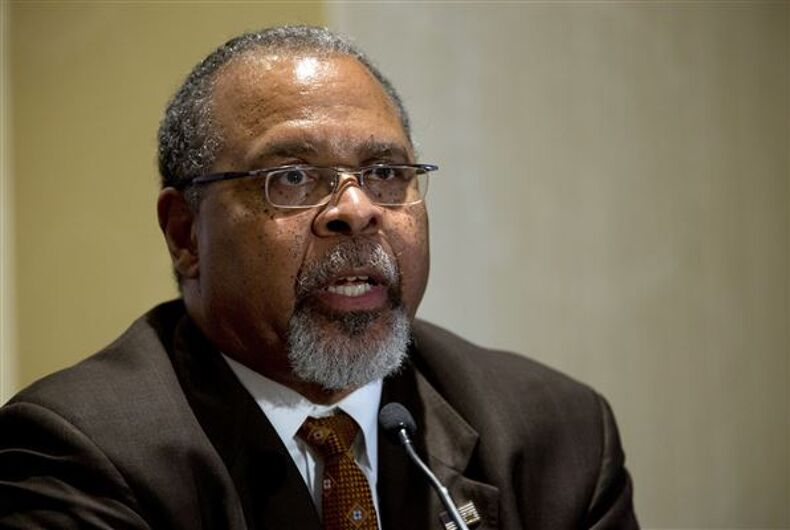 Don’t relax yet, the “religious freedom” executive order that would give a license to discriminate against the LGBTQ community and others isn’t dead yet, according to comments made by domestic policy chair of President Donald Trump’s transition team Ken Blackwell.

Blackwell, a senior fellow at the Family Research Council, told reporter Michelangelo Signorile of SiriusXM Progress, in a brief interview at this weekend’s Conservative Political Action Conference (CPAC), that he fully expects the order is coming sooner than later.

Leaked drafts of the order show that it would allow those citing a firmly held religious belief could refuse to offer goods and services based on opposition to same-sex marriage and parenting, premarital and non-heterosexual sex, transgender identity and abortion.

The White House was forced to answer questions by a Washington Blade reporter after LGBTQ Nation broke the story of the rumored order, followed by a press release attempting to squelch fears but failing to pledge to not go ahead with such an action in the future.

Blackwell said that the lawyers who had written the order are now in the process of redrafting it, including Ken Klukowski, the former director of Family Research Council’s Center for Religious Liberty.

Blackwell shared that Klukowski had “actually structured” the draft order as a legal adviser to the Trump transition team.

He believes that what he calls the “anchor concept” will have to do with businesses gaining the right to turn away LGBTQ people, and others who offend their religious sensibilities.

“I think small business owners who hold a religious belief that believes that traditional marriage is between one man and one woman should not have their religious liberty trampled upon,” he explained. “I would imagine that that will be, strongly and clearly, the anchor concept.”

Klukowski said that “because it’s been publicly disclosed by people on the transition team that I worked on the transition,” he was “not at liberty to speak about” the executive order, when asked to respond to Blackwell’s statements.

Earlier this month, an anonymous member of the Trump cabinet told the Pittsburgh newspaper Sharon Herald that a “religious liberty” action would be coming from the administration soon, likely within the next 30 days.

Tony Perkins, the president of the Family Research Council who campaigned with Trump, also believes the order is still coming.