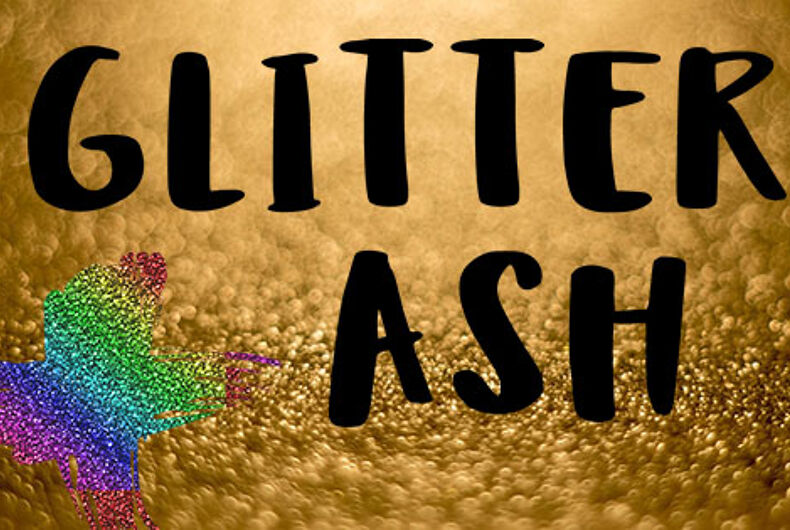 On Wednesday LGBTQ Christians will face the annual dilemma of whether to take part in a religious rite or join the masses in telling their friends, “Hey, you’ve got a smudge of dirt on your forehead.”

It’s Ash Wednesday, the day on the Christian calendar that signals the start of Lent, a 40-day-long season of sacrifice, repentance and reflection, leading up to Easter.

Traditionally, Roman Catholics and many Christian followers receive ashes — the burned and blessed remains of palms that were shared the prior year on Palm Sunday — in the sign of the cross on their foreheads. Ministers and priests typically utter words to the effect of, “Remember thou art dust, and to dust you shall return.” Which basically means, “no matter what you do, you’re still gonna die, and before you do you’d better get that shit in order, pronto.”

This year, Rev. Marian Edmonds Allen, executive director of Parity, has joined with other organizers to launch an initiative called Glitter+Ash, to make the observance more LGBTQ-friendly. Their effort to give sparkle to the sinful has made headlines around the world, and there is information at its website, Facebook page and on YouTube.

“Ash Wednesday is a day when Christians are highly visible,” the Rev. Edmonds Allen said in a statement. “Glitter Ash Wednesday will demonstrate that LGBTQ Christians and our allies are passionate about our faith, and about seeking justice and wholeness for LGBTQ communities and other marginalized people.”

Already packets have been signed, sealed and sent in the mail. According to the statement, they contain traditional ashes mixed with purple glitter, “combining a traditional symbol of repentance with a message of solidarity.”

“People are taking to the streets to give voice to their core values and beliefs, and progressive Christians must be visible participants in standing up for justice,” said the Rev. Elizabeth M. Edman, co-organizer of #GlitterAshWednesday, in a statement. “Ashes are a bold public statement that death and suffering are real. The glitter will be a sign of hope and our promise not to despair in these difficult times.”

“Glitter Ash Wednesday is an opportunity to raise awareness and authentically create dialogue about the ways many marginalized communities have been hurt by the Church,” Pastor Elly Mendez Angulo, leader of the United Church of Christ’s Encuentros de Gracia y Bienvenida and one of the first pastors to sign up for #GlitterAshWednesday, said in a statement. “We intend to engage our primarily African descent, LGBT+ congregation with the surrounding Latinx community in pursuit of a shared witness.”

The Rev. Elder Rachelle Brown, global moderator of Metropolitan Community Church, said: “MCC is a proud partner with Parity in queering Ash Wednesday, through glitter ashes and any other way that LGBTQ+ people choose to be present and visible during the holy season of Lent. Glitter ashes represent a call to deeply consider long- held traditions and ways that we mark our bodies as present and visible. In this season, we will shimmer in the presence of our Creator.”

The official position of the Catholic Church and the staunchly conservative Catholic League is unclear as of press time, although LGBTQ Nation did reach out to each for comment. At least one right-wing writer for a Christian website, Lifezette, blasts the concept as “sacrilege.” Katie Nations, who identifies herself online as married and the working mother of three children in Oklahoma City, denounced the enterprise in her blog post.

A day with such holy meaning should not be trivialized or hijacked by a cultural or political agenda that seeks to take attention away from God and worship — and direct it toward a tiny segment of the population for that group’s own purposes.