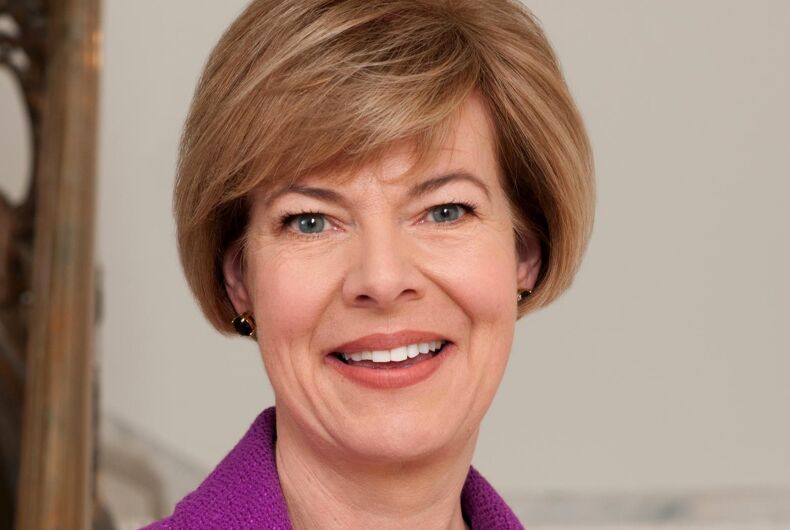 An email from the conservative group Restore American Freedom and Liberty suggested that Senator Tammy Baldwin wants to force 5-year-olds to “learn about gay sex.” Politifact has rated that statement as “false.”

Tammy Baldwin is the first out gay US Senator and is up for reelection in 2018. Several PACs have been created to raise funds and attempt to draft Milwaukee County sheriff David A. Clarke Jr, famous from his frequent appearances on Fox News.

One of the PACs sent out a fundraising email with this, according to the Milwaukee Journal-Sentinel:

Leftist lesbian Senator Tammy Baldwin is a pervert.[…] She is working to end all marriage laws and require all Americans to be subjected to LGBT sensitivity training. In fact, she wants to require children starting at age 5 to learn about gay sex! She is disgusting, and it is vital that Sheriff David Clarke defeats her!

Tammy Baldwin has not supported any of those positions, but the last one caught Politifact‘s eye.

Upon investigation, Politifact thinks that statement is referring to the Real Education for Healthy Youth Act of 2016, which Baldwin co-sponsored but that never became law.

The bill would have awarded grants for age-appropriate sex education programs. Regarding elementary school, the bill says the programs would be about “broadening student knowledge about issues related to human development, relationships, personal skills and sexual behavior, including abstinence.” The bill specifically barred programs that “are insensitive and unresponsive to the needs of sexually active youth or lesbian, gay, bisexual, transgender, queer, and questioning (LGBTQ) youth” from receiving these grants.

As Politifact pointed out, “elementary” education does not refer to 5-year-olds, “age-appropriate” means that learning about any sex acts – gay or straight – would not be included in the curriculum, and that the bill only gave grants, a far cry from the email’s claim that it would “require” children to learn about gay sex.

In the age of fake news, it’s important for voters to understand what’s real and what’s not. This PAC is trying to prey on some people’s lack of comfort with LGBTQ people to get them to associate Baldwin with child molestation.

Politifact did not investigate the other claims in the email.