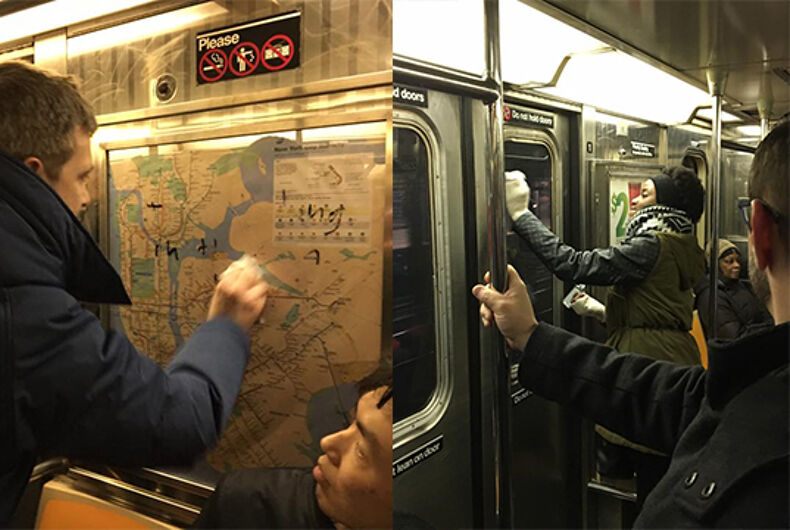 A subway train in Manhattan, on the Upper West Side, full of people sitting silently, in shock at what they are seeing: swastikas and anti-Semitic remarks scrawled across windows and advertisements.

Then, one man stood up to take action, announcing that alcohol dissolves Sharpie, which started everyone searching for hand sanitizer and tissues.

Gregory Locke shared the moment on Facebook, where it went viral and attracted national news coverage.

“I’ve never seen so many people simultaneously reach into their bags and pockets looking for tissues and Purell. Within about two minutes, all the Nazi symbolism was gone,” he posted on Saturday.

But he isn’t giving up.

“‘I guess this is Trump’s America,’ said one passenger. No sir, it’s not. Not tonight and not ever. Not as long as stubborn New Yorkers have anything to say about it.”

The Southern Poverty Law Center tracked an alarming number of such incidents of racist harassment, intimidation and violence in the immediate aftermath of Donald Trump winning the presidency.

“Seeing a bunch of strangers come together to stand up for what everyone knows is right was very heartening,” Locke told a local ABC affiliate, saying the graffiti was removed within two minutes.

Watch that report in the video below.

After photog refused to shoot their wedding, this couple got an amazing surprise