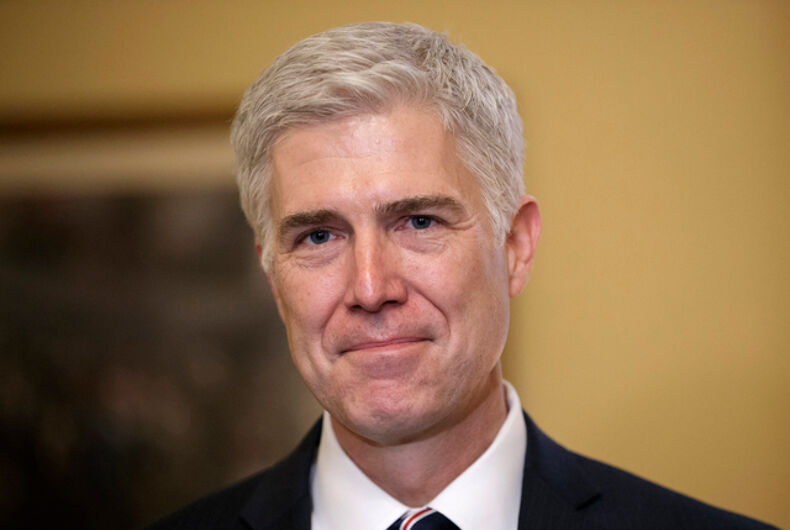 President Donald Trump’s nomination for the Supreme Court, Neil Gorsuch, has a gay friend, but that doesn’t necessarily mean he won’t allow for “religious freedom” laws to strip the LGBTQ community of their rights.

Lawyer Joshua Goodbaum once worked as a law clerk under Gorsuch, and reports that he received his one-time boss’s support in 2014 when he married his husband.

“He said, ‘This is a wonderful thing. You’ll see how your relationship grows,'” Gorsuch told him, Goodbaum recalled to Reuters.

“I have never felt the least whiff from him of homophobia or intolerance toward gay people,” Goodbaum added.

Yet Trump has shown that we should have our guard up against those who proclaim to support us on the one hand, yet turn around and support legislation that would strip us of our rights.

In Trump’s case, we have the reported anti-LGBTQ executive order to look to, which it reportedly took his daughter, Ivanka, and son-in-law, Jared Kushner, to squash, at least for now.

Trump has also pledged to sign the First Amendment Defense Act should Congress pass it, which would give the religious right a license to discriminate in the areas of healthcare, employment, housing and more. His choice for Attorney General, Sen. Jeff Sessions, has also defended FADA.

Trump has also shown determination to “destroy” the Johnson Amendment, allowing churches to use their pulpits as partisan propaganda delivery systems while still enjoying tax-free status.

Gorsuch wrote in a 2005 article for National Review that liberals “have become addicted to the courtroom, relying on judges and lawyers rather than elected leaders and the ballot box, as the primary means of effecting their social agenda on everything from gay marriage to assisted suicide to the use of vouchers for private school education.”

It does not take a legal expert to understand what that spells for the future of LGBTQ rights, among other points of interests to progressives, if Gorsuch is passed through and allowed to take the seat vacated by the late Justice Antonin Scalia.

The Knights of Columbus, a Roman Catholic fraternal organization, said they believe Gorsuch would uphold religious exemptions “and the right to life of every person.”

The seat has remained open ever since the Republicans invented a new rule about presidents in their final year of office not having the right to place a judge on the Supreme Court, blocking Obama’s pick, Merrick Garland, a man many of them once praised.

An investigation into Garland’s record by the Washington Blade showed that his record on LGBTQ issues, while not extensive one way or the other, left some room for concern. Garland ruled against LGBTQ plaintiffs and self-described advocates in four cases that came before him.

Still, Garland won the support of many LGBTQ rights groups, including the Human Rights Campaign, which has come out in opposition to Gorsuch.

“Since the moment he stepped foot in the Oval Office, President Trump has attacked equality, said HRC President Chad Griffin.

“And now, he has nominated Judge Gorsuch to the Supreme Court, fulfilling his campaign promise to nominate a justice in the mold of Antonin Scalia, one of the most vehemently anti-LGBTQ justices to ever sit on the court who once went so far as to compare gay people to murderers,” he continued.

“The Supreme Court has played a central role in advancing the promise of equality for LGBTQ Americans, and Judge Gorsuch’s anti-equality record — from opposing crucial medical treatment for a transgender person to supporting a license to discriminate for private corporations — make him unfit to sit on the nation’s highest court. We cannot afford a justice who will roll back our rights, or who will be a rubber stamp for Donald Trump’s unconstitutional actions. And America cannot afford to have Judge Gorsuch on the Supreme Court. We oppose this nomination.”

“We absolutely must not confirm a Supreme Court nominee who has ruled that the religious beliefs of employers can trump the law,” said Rachel Tiven, chief executive of Lambda Legal, mirroring that concern.

When New Yorkers found Nazi graffiti on a subway car, they sprang into action