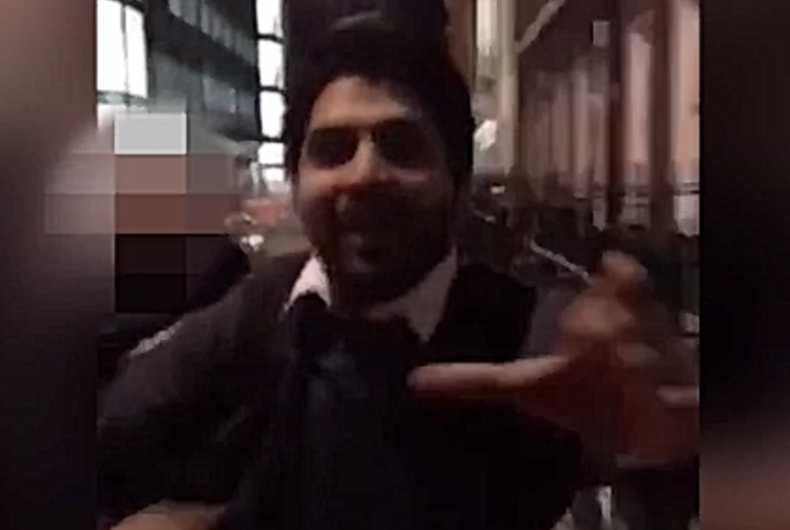 Faisal Ahmed said that he would lose his job if he is sent to prison.Photo: Screenshot

A gay couple was viciously attacked in London for holding hands in public last November, and the attacker was sentenced to 10 weeks in jail.

The couple – Sam Martin, 32, and Tom Davies, 27 – were in the Soho neighborhood when Faisal Ahmed, 32, approached them from behind. Ahmed shouted “you f***ing gay boy” and hit Martin in the neck and placing him in a headlock before dragging him to the ground, the Evening Standard reports.

The men followed Ahmed and called the police, saying later that they wanted to be sure he was arrested. Martin took out his phone and started recording, and Ahmed attacked again.

Police said that when they arrested him, Ahmed shouted, “I punched him and he f***ing deserved it.” He later told the court that he was on an alcohol “binge” and had no recollection of the events.

This was the first time Martin and Davies held hands in public, after being together for 8 months. Martin told the court that the attack left him feeling “shocked, embarrassed and ashamed to be gay.”

Davies said, “Since it happened, we have felt really anxious. If I walk home from work and it’s dark and I am on my own, I am so very aware.”

Ahmed’s attorney asked the judge not to include a jail sentence since Ahmed would lose his job as an IT worker and be unable to support his mother financially.

Upon sentencing, Judge Julia Newton said: “This was a totally unprovoked assault. You uttered homophobic remarks and I think custody is appropriate.”

He was sentenced to 10 weeks in jail and 10 weeks probation. He was also ordered to pay a £115 ($144) victim surcharge and to stay away from the couple for two years.