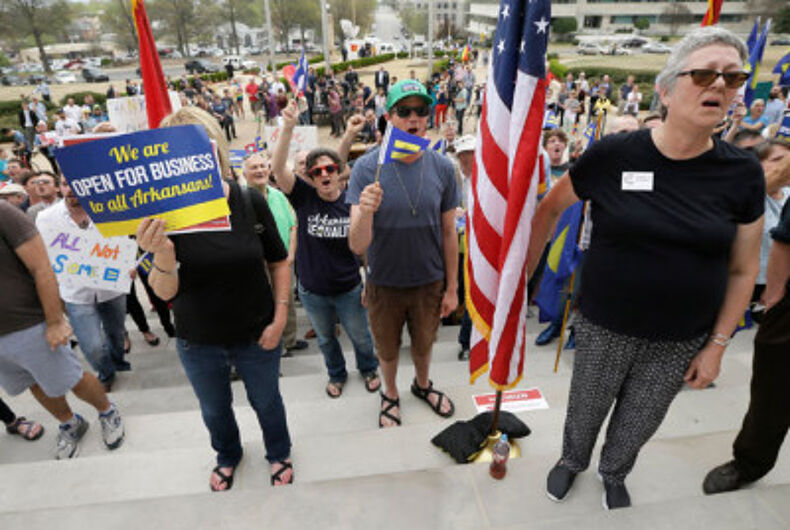 LGBT rights advocates gather at the Arkansas state Capitol in Little Rock, Ark., on April 1, 2015, after the state became the epicenter of a fight over measures critics say are anti-gay. Several Arkansas cities are trying to stem any potential fallout with efforts to push back on the new laws and expand anti-discrimination protections. Photo: Danny Johnston, AP

The Arkansas Supreme Court struck down a Fayetteville’s LGBTQ-inclusive non-discrimination ordinance on the grounds it violates a 2015 state law prohibiting cities from adding categories not included in state protections.

Arkansas is one of a handful of states that bars municipalities from passing expanded non-discrimination protections. The City of Fayetteville tried to find a loophole, arguing that because the state’s anti-bullying law includes gender and sexual orientation, their ordinance could too.

The City Council approved its ordinance in June 2015, shortly after the passage of the restrictive state law, calling it “An Ordinance To Ensure Uniform Nondiscrimination Protections Within The City of Fayetteville For Groups Already Protected To Varying Degrees Throughout State Law.”

Fayetteville was one of a number of cities that passed expanded non-discrimination ordinances after the February 2015 passage of law preventing the adoption of any law that “creates a protected classification or prohibits discrimination on a basis not contained in state law.”

But the Supreme Court rejected the city’s arguments. Instead, it ruled unanimously against the LGBTQ-inclusive ordinance, explaining:

The Ordinance specifically states that its purpose is to “extend” discrimination to include “sexual orientation and gender identity.” In essence, [the city ordinance] is a municipal decision to expand the provisions of the Arkansas Civil Rights Act to include persons of a particular sexual orientation and gender identity. This violates the plain wording of [the state law] by extending discrimination laws in the City of Fayetteville to include two classifications not previously included under state law.

Fayetteville City Attorney Kit Williams told The Associated Press that he’ll shift his focus to challenging the constitutionality of the state’s law.

“They can’t … prevent the city from enacting protections for its gay and lesbian residents,” Williams said.

Meanwhile, Mat Staver, founder of the right-wing policy group Liberty Counsel, said in a release that he will be taking his fight to Virginia next week. That state has a similar law, requiring that municipal non-discrimination categories align with state-level ones. The Virginia Supreme Court will be considering a case brought against the Fairfax County School Board for adding protections against discrimination based on sexual orientation, gender identity and gender expression—which are not included in state law—to its policies.

“The Arkansas Supreme Court’s ruling is on point with the Virginia law and other states that require non-discrimination categories to be set at the state level,” Staver said. “It makes no sense to have competing and conflicting laws within a state. This is the same issue that I will argue next week before the Virginia Supreme Court.”

But Staver didn’t stop at the legal arguments. He went on to characterize transgender people as confused, dangerous criminals.

“Moreover, adding gender identity to a non-discrimination law makes a mockery of the law,” he said. “The law should not give legal sanction to a confused mind or to those intent on causing harm or invading the privacy of other citizens.”

But the Human Rights Campaign said in a statement that Arkansas’ state law is unconstitutional and causes harm to LGBTQ people.

“Let’s be clear, the state’s preemption law is unconstitutional. This ruling from the Arkansas Supreme Court is an attack on LGBTQ Arkansans and takes away hard-won protections approved by voters in Fayetteville,” said Kendra R. Johnson, HRC Arkansas state director. “Fayetteville’s leaders and citizens chose to protect their friends and neighbors when their representatives in Little Rock would not. Removing these protections leaves LGBTQ people without local, municipal or state protections, putting them at heightened  risk of discrimination as they simply go about their daily lives. We oppose this harmful ruling.”