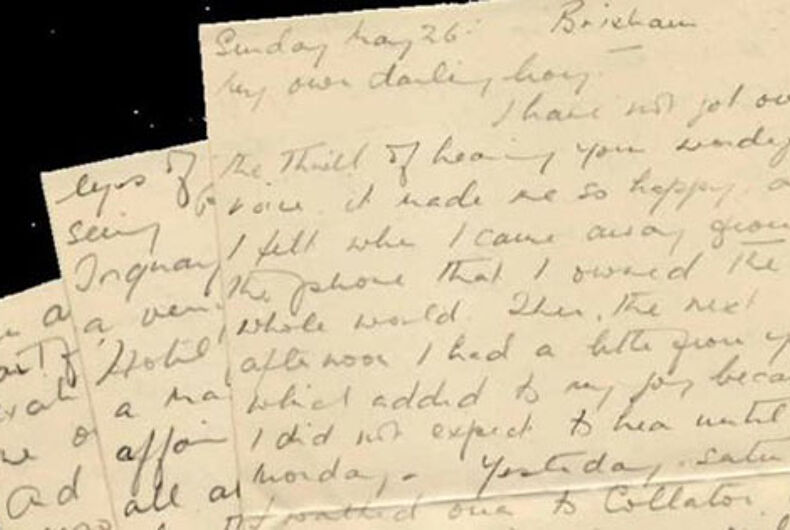 Now it can be told: during World War II, a British soldier fell in love with another man, a secret romance revealed in the love letters he sent nearly 77 years ago.

As Pink News reported, this treasure trove of same-sex love is now on display at the Oswestry Town Museum, in Shropshire, England.

The museum’s owner, Mark Hignett, found them on eBay and bought several letters, which had been discovered in the home of Gilbert Bradley after he died in 2008.

Hignett was so intrigued he spent hundreds of dollars buying 600 more letters, which led him to make the surprising discovery that they were between two men.

Bradley had been so worried that their hidden love affair might result in criminal punishment that he signed all his correspondence to Gordon Bowsher with only his initial, “G.”

In a prophetic passage, one letter from Bowsher to Bradley read: “Wouldn’t it be wonderful if all our letters could be published in the future in a more enlightened time. Then all the world could see how in love we are.”

In other letters, the pair professed their love: “My darling, I lie awake all night waiting for the postman in the early morning, and then when he does not bring anything from you I just exist, a mass of nerves.”

“My own darling boy,” Bowsher wrote, “There is nothing more than I desire in life but to have you with me constantly.

“I can see or I imagine I can see, what your mother and father’s reaction would be… the rest of the world have no conception of what our love is – they do not know that it is love.”

It’s not clear how or exactly when their romance ended, but after the war, Bowsher moved to California and became a well-known horse trainer.

Watch a video report from the BBC by clicking here.

In Trump’s America, Christian proselytizing is another form of oppression

Hollywood’s sliding scale of justice for winning an Academy Award