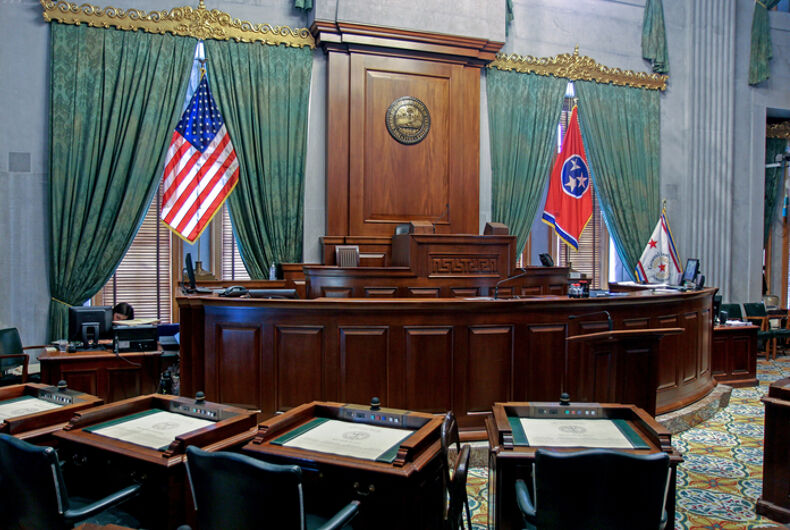 NASHVILLE, Tenn. (AP) — After recent protests around the state Capitol in Nashville, some Republicans want a crackdown on demonstrators and tougher security requirements for entering the legislative office complex.

Democrats are pushing back, arguing that access to lawmakers shouldn’t be restricted only because many of the protesters oppose the policies of Republican President Donald Trump on issues including immigration, race, abortion and LGBT rights.

The latest clamor for tighter security follows allegations that protesters last week disrupted state business and vandalized a legislative aide’s flower vase when they followed a Republican lawmaker to his office.

But those claims are under dispute. Some question whether the interrupted press conference about controversial legislation should be considered official legislative business. And as the Nashville Scene first reported, the vase in Rep. Mark Pody’s office was knocked over inadvertently, most likely by a TV cameraman covering the event.

Acknowledging that “There’s sometimes a fine line between free speech and the situations where you’re worried about inciting some sort of violence,” the Collierville Republican added, “We haven’t seen anything like that at all.”

While Norris argued that protesters might not accomplish much by shouting and chanting outside Capitol meetings, he turned back questions by WTN-FM conservative host Ralph Bristol about whether state troopers should take more “aggressive action” against protesters.

“I don’t think aggression is called for — aggressiveness or aggression on either side, at this point,” Norris said. “I just think we need to be very deliberative and deliberate about what we do to keep people safe.”

Norris, who’s considering a gubernatorial bid next year, was heavily criticized by the show’s listeners for not supporting a more hard-line approach.

Senate Speaker Randy McNally, R-Oak Ridge, announced earlier in the week that he was considering restoring requirements to scan IDs and have all visitors wear badges within the building. That announcement came after the Republicans’ cancelled press conference to discuss their bills about transgender bathroom access and defining marriage as between a man and a woman.

One Republican sponsor, Sen. Mae Beavers of Mt. Juliet, suggested to The Associated Press that protesters could have been arrested under a provision of the state constitution allowing each chamber to “punish, by imprisonment, during its session, any person not a member, who shall be guilty of disrespect to the House, by any disorderly or any contemptuous behavior.”

On the Ralph Bristol show she said the protesters “scared a lot of people” and repeated the claim of vandalism of the staffer’s vase.

Chanting and singing protesters have regularly attended this legislative session. Hundreds jammed into the Capitol during Gov. Bill Haslam’s annual State of the State address. And 10 were arrested on the day of Trump’s inauguration last month after demonstrators shackled themselves to the state Capitol doors.

Beavers argued that the current protests have little in common with the anti-income tax demonstrations of the early 2000s that were a springboard to many Tennessee Republicans’ political careers.

Memories of the defeated income tax proposal are widely cherished in the GOP. However, many gloss over some of the less proud moments of the protest, such as when a rock was hurled through a window of the governor’s office, demonstrators banged on the Senate chamber doors with their fists and lawmakers were accosted as they made their way down the Statehouse hallways with police escorts.

Those protests were fueled by talk radio hosts, including one who gave out the home address of a Democratic senator on the air. Frank Gibson, who was then political editor of the Tennessean, was punched in the stomach by a protester who mistook the journalist for a lawmaker.

“He said: ‘There’s one of them now,’ and just swung an upper cut into my gut,” said Gibson, who had left the Capitol to retrieve a pizza delivery for reporters covering the debate and protests. “The protest had gotten out of hand.”

Ben Cunningham, founder of the Nashville Tea Party and a leader of the anti-income tax demonstrations, said public participation should be encouraged — up to a point.

“I encourage citizens, no matter the political persuasion, to protest, cajole, persuade, lobby, etc. anytime, anywhere,” Cunningham said. “The number of citizens who actively participate in state politics is so low that any level of involvement is progress.”

“However, when protesting shuts down the mechanics of government and the process of deliberation then it has crossed the line into anarchy,” he said.