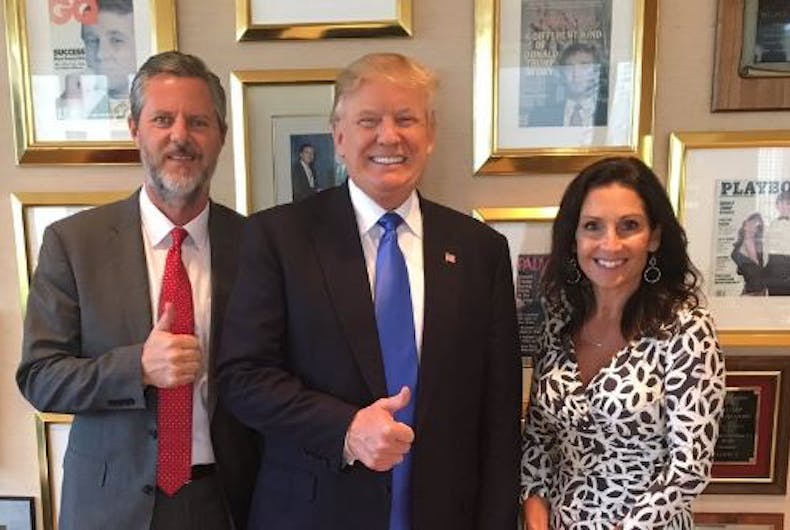 Jerry Falwell, Jr., president of Liberty University, will head a White House task force to identify changes that should be made to the country’s higher education system.

Falwell told The Chronicle of Higher Education on Tuesday that he had been asked by President Trump to take the position, which Liberty University’s spokesman Len Stevens confirmed to NBC News.

Falwell told The Chronicle in an interview that he sees the appointment as a response to what he called “overreaching regulation” and micromanagement by the department on issues such as accreditation, policies affecting student recruitment, and the new “borrower defense to repayment” regulations, a loan forgiveness program for those who have been mislead or victimized by misconduct in violation of certain laws.

“The goal is to pare it back and give colleges and their accrediting agencies more leeway in governing their affairs,” he said, noting that he has been speaking with several other college leaders and at least one head of an accrediting agency.

“I’ve got notebooks full of issues,” he added.

Similarly, Stevens said Falwell would focus on “overregulation and micromanagement of higher education” in his role as head of the task force.

Falwell said he was offered the position of education secretary, but that he turned it down because he didn’t want to move his family and couldn’t leave Liberty for more than a couple years.

He supports Trump’s pick for the position, Betsy DeVos.

“The task force will be a big help to her. It will do some of the work for her,” he said.

Falwell supported Trump during his campaign, drawing the criticism of a group of Liberty students, who did not see the endorsement as fitting with the school’s moral conscience.

While the position has not been officially announced, Falwell said Trump’s chief strategist, Steve Bannon, gave him the green light to discuss it.

“The safety of every transgender, lesbian, gay, bisexual college student is in jeopardy. This announcement, following the nomination of Betsy Devos for U.S. Secretary of Education, is truly frightening for all Americans who value diversity, campus safety and LGBTQ inclusion within higher education,” said Campus Pride Executive Director Shane Windmeyer. “There is no doubt that recommendations of this task force led by Jerry Falwell, Jr. will have grave consequences for LGBTQ students, faculty and staff within higher education. Campus Pride calls upon the Trump Administration to reconsider their choice of Falwell as well as provide broader inclusion and a balance of perspectives for this task force, particularly for the LGBTQ community. This task force must represent a wide diversity of higher education professionals in order to offer any substantive recommendations that will further improve college campuses. Any step backward to exclude, discriminate or harm LGBTQ people within higher education will be met with a wave of resistance.”

Trump settled a fraud case against his real estate seminar Trump University for $25 million, shortly after winning the presidential election.