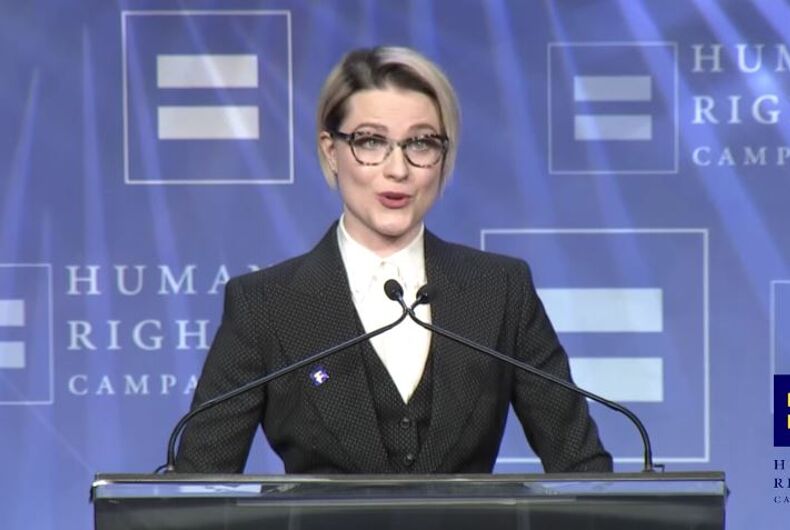 Evan Rachel Wood opened up about struggles with her sexual orientation, bigotry, and thoughts of suicide during a candid speech at the Human Rights Campaign North Carolina Gala.

The actress, who stars in HBO’s “Westworld,” received the HRC Visibility Award at Saturday’s event.

She described growing up “a tomboy in Raleigh, North Carolina,” immersed in both rough and tumble play as well as the arts. Still, she felt the need to bury the truth of her bisexuality because of “hate speech.”

She said she also always thought men were beautiful, and realized she had always felt that way. She didn’t understand what she was feeling until she heard an actress say the word “bisexual,” and when she learned what it meant she said she began to feel “less crazy” and “less alone.”

The discrimination and hatred she saw directed at the LGBTQ community, as well as her initial confusion as to what her attraction for both genders meant, forced her to “silence” her voice, saying she thought it would save her.

Wood came out as bisexual on Twitter in 2012. She was married to actor Jamie Bell for two years, with whom she has a son, and is currently engaged to musician Zach Villa, her partner in the musical duo Rebel and a Basketcase.

She said during her HRC speech on Saturday that while reading information released by the Human Rights Campaign on bisexuals and bisexual youth last year, she was startled by the statistics, not because it came as a surprise but because ‘it was like reading an autobiography.’

“Statistics about suicide, addiction, sexual harassment, rape, and intimate partner violence specifically rang true for me. And I wracked my brain as to why, why were bisexuals so susceptible to these kinds of things? And I figured there was no better person to ask than myself, and the only answer that I could come back with was self-esteem. There was shame about what I felt and how I identified, from outside the community, and unfortunately as well as in at times,” she said.

“There was misinformation and what seemed to be a competition of suffering,” she continued. “I felt denied the right to suffer, and more importantly the need to connect through that suffering.”

She encouraged empathy for suffering, no matter how great or how small, and said she felt the urge to tell her story, because no one else will.

“Some people don’t believe that artists should speak up,” she said. “I think Nina Simone said it best when she said, ‘I choose to reflect the times and situations in which I find myself. That, to me, is my duty.'”

She said she chooses to use her voice “because it would feel selfish to have acquired the platform to represent the unrepresented and not use it, and not be heard.”

“And you will be heard,” she added. “People wouldn’t try so hard to silence and discredit you if your voice didn’t matter.”

After all, the proud, strong voices of others mattered immensely to her.

“Because of the voices I listened to, because of the people I identified with, the films I had watched, the music I had heard, because of words like ‘bisexual’ and the doors that it opened, I’m still here,” she said. “And I didn’t miss out on the most beautiful thing I’ve seen yet, and that was my son.”

Watch Woods full speech in the video below.

‘League of the South’ calls for volunteers to defend ‘Christian civilization’