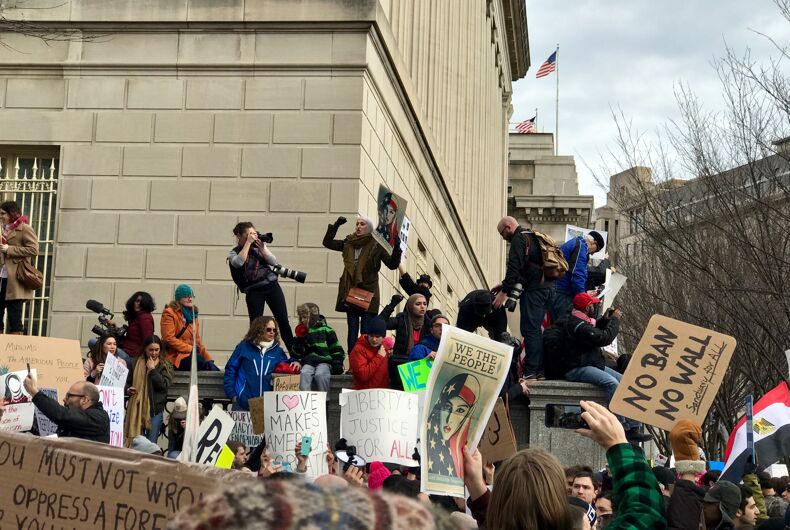 Protest are happening today in Washington, D.C. Watch live video of the demonstration below.

LGBTQ Nation was also on the scene in North Carolina. Today’s protests in Charlotte were originally scheduled to take place at the airport, but were relocated after six people — all transgender or people of color — were arrested in protests at the airport last night.

Attorneys struggled to determine how many people were affected by the rules, which Trump said Saturday were “working out very nicely.”

But critics described widespread confusion, with travelers being held in legal limbo because of ill-defined procedures. Some lawyers manned tables at New York’s Kennedy Airport to offer help to families with detained relatives.

“We just simply don’t know how many people there are and where they are,” said Lee Gelernt, deputy director of the American Civil Liberties Union’s Immigrants’ Rights Project.

Advocates for those detained or prevented from entering the country say the chaos has made it difficult to assess just how many are impacted, but the executive director of National Immigration Law Center, Marielena Hincapie, told the Associated Press “this is just the beginning.”

“We’re really in a crisis mode, a constitutional crisis mode in our country, and we’re going to need everyone,” Hincapie said. “This is definitely one of those all-hands-on-deck moments.”