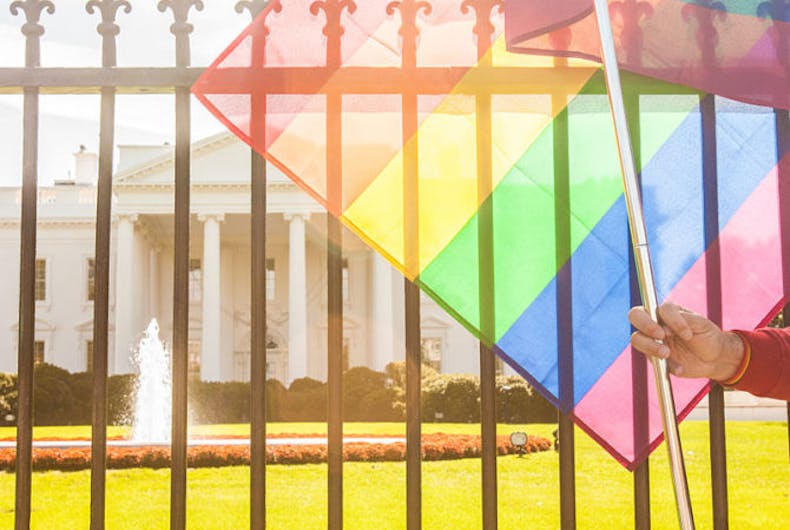 The Women’s March on Washington brought millions of women, men, and children out into the streets to demonstrate.

Included in those stated unity principals is the fight for LGBTQIA rights:

We firmly declare that LGBTQIA Rights are Human Rights and that it is our obligation to uplift, expand and protect the rights of our gay, lesbian, bi, queer, trans or gender non-conforming brothers, sisters and siblings. We must have the power to control our bodies and be free from gender norms, expectations and stereotypes.

The huge turnout and success of the March on Washington, and the sister rallies around the globe, has inspired a National Pride March, a “mass” protest at the nation’s capital on June 11, as it coincides with Capital Pride’s June 8-11 weekend of events.

David Bruinooge, 42, lives in New York, and has friends in D.C. He was moved to start a Facebook event page announcing the event while watching the Women’s March on Washington.

“I was watching the events unfold on TV and I was very proud and inspired by all the women, the strong women in our country who were kind of taking this to the street and getting their voices heard,” he told the Washington Blade. “And in the back of my mind as an openly gay man I thought the gay community should be doing something like this to follow up on the momentum.”

This would mark the first large-scale march on Washington since the National Equality March in 2009. Still the largest march occurred in 1993, called the March on Washington for Lesbian, Gay, and Bi Equal Rights and Liberation. Estimates of the crowd size vary, with organizers estimating a million in attendance, with the D.C. Police Department coming up with a similar count of 800,000 to over one million.

The first such demonstration, the National March on Washington for Lesbian and Gay Rights, took place in 1979, which drew around 125,000.

Organizers are encouraging those living in cities with pride events that coincide to consider staying put and attending those local offerings while marching with those in D.C. “Or even it doesn’t fall on the same weekend. We can all march in solidarity across the country,” the Facebook post continues. “Our community is large enough to fill all the Pride Events scheduled that weekend. And we will make this truly a ‘National Pride March’ together.”

This is a wise move, because it not only manages to avoid the issue of undermining the work local groups have done, but also helps set up a sister rally approach, which was successful for the Women’s March. It means that not only will media outlets report on the big event in Washington, they will be able to cover related demonstrations taking place in their own backyards, increasing total coverage.

There has been a growing sense, especially among the older generation, that a sense of complacency had set in. After all, there have been so many advances in the fight for rights since the days of the Compton’s Cafeteria and Stonewall riots.

The fight for same-sex marriage was waged and won, Don’t Ask Don’t Tell repealed, and hate crime legislation was signed into law by President Obama, leading many to believe we had reached equality, even in spite of a lack of protections on the federal level, with The Equality Act continuing to languish in Congress.

The argument that there is more or less nothing to fight for, while always erroneous, is more obviously flawed now than ever.

President Donald Trump has filled his administration with individuals with a history of anti-LGBTQ views and voting records, and his Supreme Court nomination list is equally disconcerting.

The new WhiteHouse.gov has no reference of LGBTQ rights, unlike its predecessor which is now housed at ObamaWhiteHouse.gov.

The Centers for Disease Control reportedly shelved plans for an LGBTQ youth summit over concerns with how Trump would view the event.

There are also reports that The White House Office of National AIDS Policy has been closed.

Further, Trump has also said he would sign the First Amendment Defense Act into law, which would allow for religious based discrimination in such areas as healthcare, businesses, employment, and housing. His pick for Attorney General, Sen. Jeff Sessions, also recently defended the bill.

President Trump also has an admiration for the so-called leadership of Russian President Vladimir Putin, who signed a “gay propaganda” law in 2013, making demonstrations like the LGBT March on Washington illegal in his country.

Adviser Kellyanne Conway said Trump and Putin will speak on Jan. 28 to discuss areas where they might have “common ground.”

Art exhibit looks at what it means to be transgender

Watch: Protestors demonstrate against Trump’s Muslim ban in DC and across nation