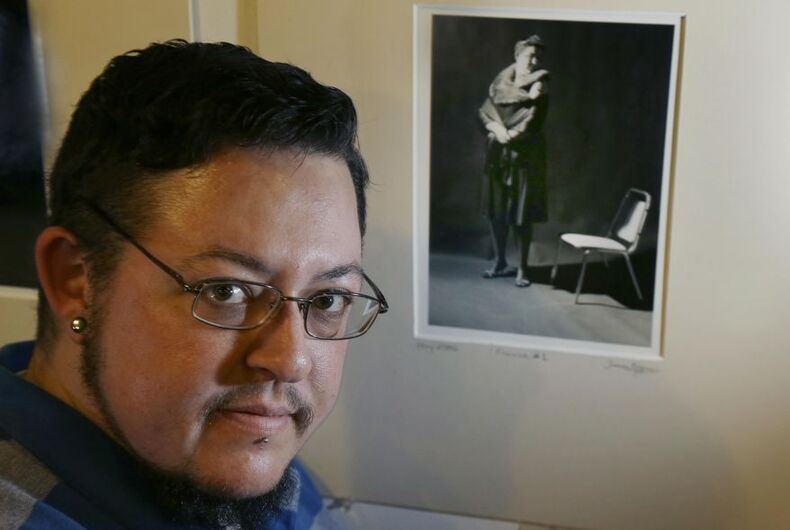 In this Jan. 25, 2017 photo, artist Jeff Kramer poses next to one of his self-portraits entitled "The Gender Series," a part of the group exhibit "This is What TRANS Feels Like" at Wrong Brain Art Collective in Dover, N.H. Kramer said he wants people to see that gender is based on a spectrum and that roles keep changing. The exhibit runs through Feb. 14. Photo: AP Photo/Elise Amendola

DOVER, N.H. (AP) — It started out as simple “manscaping,” she said. Shaving begot waxing. Then came an ever so slight, but premeditated, arch to the brow. It wasn’t long after that Chloe Lacasse, before she ever knew that’s who she was, was wearing dresses, heels and a little makeup.

“What would life have been?” said Lacasse, of not knowing until the last few years that she was transgender. “What would it be like to get all those years back? But you don’t know until you know. And I didn’t know.”

The 45-year-old Lacasse, of Concord, began her transition later in life — just a few years ago.

“I hated myself before. And suddenly there was something that I liked, that I loved,” she said.

That’s what trans feels like for Lacasse. But everyone’s stories, everyone’s journeys are different, said Jeff Kramer, the co-creator of “This is What TRANS Feels Like,” an art exhibit showing through Feb. 14 at The Wrong Brain Art Collective in Dover.

The exhibit features works by local artists — including a poem and photo spread titled “Red Lips” by Lacasse — about what it means to be transgender and the experiences transgender men and women face.

“The reason why I started this show is that this piece of work saved my life,” Kramer, of Manchester, said as he pointed to a set of 12 portraits that begin with a very nattily dressed man, taking off his clothes to reveal a bound, neutral, nude who eventually dons a full set of lingerie, a mink and a tiara. These are self-portraits Kramer took before he began his transition a decade ago.

“I am showing that gender is not an ‘A’ or a ‘B’ box. It’s based on a spectrum,” Kramer said. “I want people to see there is vulnerability throughout the day. That in everything you do, the roles keep changing. I wanted people to understand that it’s not as cut and clear as people think.”

For artist Christy Hegarty, of Durham, the transgender story she is telling is not exactly hers, but it’s no less personal.

“I am not trans, but I am raising a transgender daughter,” she said of her 11-year-old.

She said her daughter started expressing that she wished she was a girl and the desire to dress as a girl as early as age 4. Over the next several years, Hegarty and her family became more involved in the LGBT community, which was a big reason she felt compelled to contribute to the show. She pointed to a gold-framed oil painting that shows a plain, brown box with a rainbow heart bursting out of its center.

“When I reflect on what trans means to me, I choose to focus on the positive,” she said. “And I feel like there are so many positives and are so many gifts that come from raising our daughter. The awareness and the education, all has been part of the gift for me.”

The exhibit was coordinated by Freedom New Hampshire in partnership with the New Hampshire chapter of the American Civil Liberties Union and Rights and Democracy.

Kellyanne Conway: Turning away Muslims is “a small price to pay” for safety