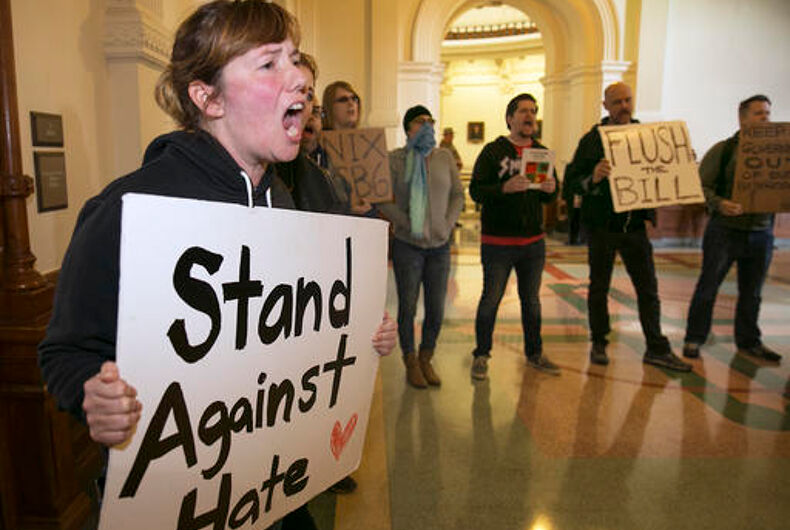 Protestors try to drown out a press conference with Texas Lt. Gov. Dan Patrick and Senator Lois Kolkhorst as they introduce Senate Bill 6 known as the Texas Privacy Act, which provides solutions to the federal mandate of transgender bathrooms, showers and dressing rooms in all Texas schools. Katie Graham shouts and makes loud noise to hinder the announcement of the filing of the bill at the state Capitol Thursday, Jan. 5, 2017. Photo: (Ralph Barrera/Austin American-Statesman via AP)

AUSTIN, Texas (AP) — Texas is flirting with losing major sporting events like North Carolina did, Dallas civic leaders warned Wednesday as they urged Republican lawmakers to stand down on a proposal that would require transgender people to use bathrooms corresponding to their sex at birth.

The issue was already stirring heated debate on the second day of the legislative session. A best-selling author has snubbed a state honor over the bill and a GOP legislator tried to implement the restrictions on bathrooms in the Capitol building. Texas has no transgender lawmakers, and state Rep. Matt Schaefer ultimately dropped the idea.

Schaefer’s attempted rule change was a taste of the likely bruising fight ahead over bathroom regulations. The bill is akin to one passed last year by North Carolina that led to significant fallout, including companies canceling expansion plans in the state, the NCAA moving championship games elsewhere and the NBA moving next month’s All-Star Game out of Charlotte.

Texas is often picked to host major sporting events, including the Super Bowl in Houston next month, the NCAA women’s Final Four in Dallas in March and the NCAA men’s Final Four in San Antonio in 2018. Phillip Jones, president of the Dallas Convention and Visitors Bureau, said he doesn’t think leagues will hesitate to steer big sporting events elsewhere if Texas goes the way of North Carolina.

“This is not speculation. This is facts, based on what we’ve seen first-hand,” Jones said of the economic fallout.

The NCAA didn’t immediately respond to a request for comment Wednesday about Texas’ transgender bathroom bill. Jones was joined by tourism counterparts from Austin, Fort Worth and San Antonio to unveil a campaign called “Texas Welcomes All,” and although no one from Houston attended, the city’s tourism agency also signaled support in a statement that expressed “no need for such a bill.”

The Greater Houston Convention and Visitors Bureau previously supported a broad equal rights city ordinance that Houston voters rejected in 2015, when opponents campaigned on a message of “No men in women’s bathrooms.”

Rick Riordan, a former San Antonio teacher who wrote the popular Percy Jackson and the Olympians fantasy series, said in a tweet that he declined an honor from the Texas Legislature over “this nonsense.” At least two other Texas writers also rejected the same invitation to have their work ceremonially recognized by lawmakers in March.

“I’m just trying to recognize the great contributions of our Texas authors. I’m sad and disappointed that it’s being used as a tool to make a public statement about this issue,” said Rep. Jason Villalba, a Dallas Republican who organized the event.

Republican House Speaker Joe Straus, meanwhile, has signaled his opposition to it. His welcome-back speech to lawmakers Tuesday included him pointedly saying, “This state should invite economic activity, not turn it away.”