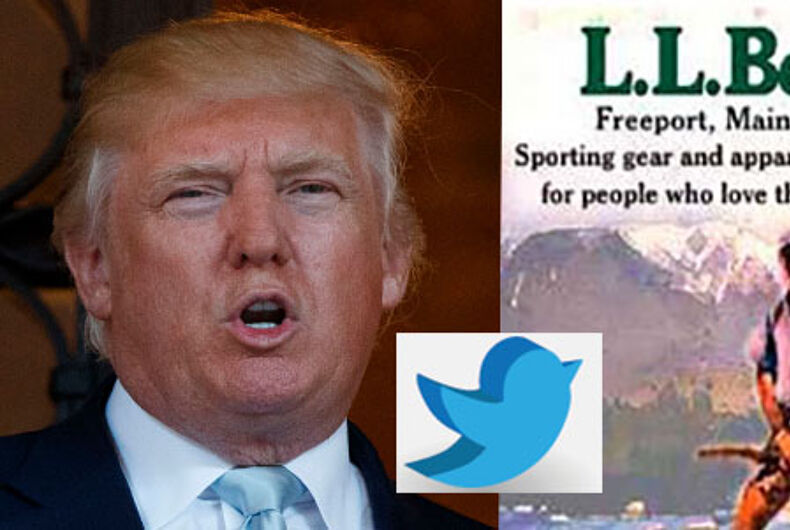 Donald J. Trump will be sworn-in as president of the United States in eight days and Thursday he encouraged all Americans to unite, in one common cause, and buy L.L. Bean products.

The unprecedented [please note the proper spelling, Mr. Trump] endorsement by a president-elect went out to the masses via Twitter. Duh.

Thank you to Linda Bean of L.L.Bean for your great support and courage. People will support you even more now. Buy L.L.Bean. @LBPerfectMaine

His endorsement followed a television appearance by the company’s heiress, Linda Bean, on “Fox & Friends,” in which she warned viewers about an anti-Trump boycott that she said will hurt the company’s employees, not just her.

As The Hill reported, “Grab Your Wallet,” the boycott’s organizer, is asking consumers to not shop at businesses that support the president-elect.

Bean is a longtime Republican activist who contributed $60,000 to a pro-Trump PAC, the Associated Press reported. That political action committee reportedly is under investigation by the Federal Election Commission since individual contributions are limited to $5,000.

L.L. Bean released a statement on Facebook, saying the company doesn’t endorse any political candidates, and asked consumers to not boycott the retailer just because one of its many family members personally supports Trump.

“Simply put, we stay out of politics,” executive chairman Shawn Gorman said in the Facebook post. “To be included in this boycott campaign is simply misguided, and we respectfully request that Grab Your Wallet reverse its position.”

While Trump’s endorsement is lighting up social media, one congressman had a particularly brilliant response to the president-elect’s tweet:

Will Trump’s endorsement impact your shopping or buying habits? Let us know in the comments.