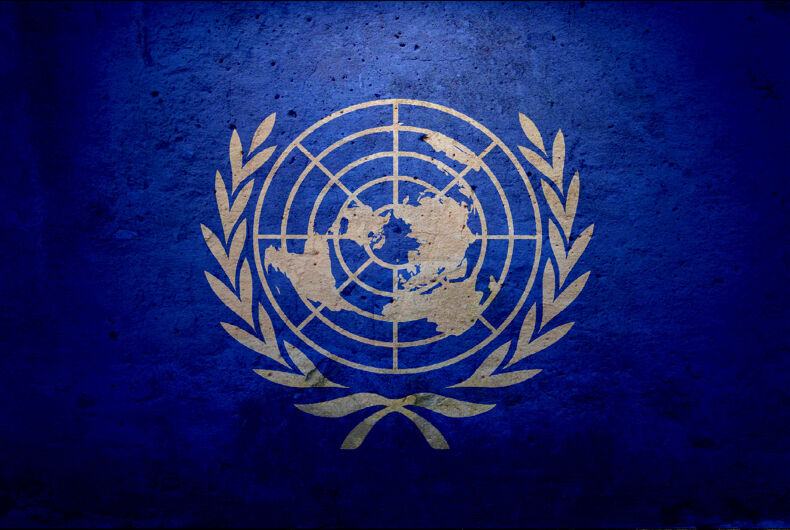 To maintain international peace and security, and to that end: to take effective collective measures for the prevention and removal of threats to the peace, and for the suppression of acts of aggression or other breaches of the peace, and to bring about by peaceful means, and in conformity with the principles of justice and international law, adjustment or settlement of international disputes or situations which might lead to a breach of the peace.” –Chapter 1, Article 1, United Nations Charter

Under that mandate, the United Nations has acted since the organization came into force in 1945 following the second long and catastrophic war of the 20th century. Today, the United Nations represents 193 member states throughout the world who come together in the organization’s General Assembly as diplomats to defuse disagreements and conflicts before they turn into armed encounters.

Also, according to the U.N. charter, the 15-member Security Council has responsibility for determining where threats to peace exist in the world, and to take deliberate steps to maintain international peace and security.

The Security Council, on December 23, voted 14-0 on Resolution 2334 to condemn Israel’s construction of so-called “settlements” on the occupied West Bank taken after the 1967 war with its Arab neighbors. Though the United States, which sits on the council, chose to abstain, throughout his presidency, Barack Obama has voiced the long-standing official policy of his country by designating Israeli settlements as a major impediment in any hoped-for two-state solution in the Israeli-Palestinian conflict.

Israeli Prime Minister Benjamin Netanyahu and President-elect Donald Trump, on the other hand, blasted the United Nations’ vote. And Trump’s proposed U.S. ambassador to Israel, David Friedman, a far-right lawyer, does not support a “two-state solution,” but does support a Jerusalem capital, the “settlement” program, and Israel’s annexation of the occupied West Bank.

Though declared illegal under international law, approximately 570,000 Israelis live in the more than 130 so-called “settlements” (a.k.a. stolen land). If the Trump, Friedman, and Netanyahu plans are enacted, they will hammer the final nail into the coffin of a Palestinian/Israeli peace.

Many see Israel’s “settlement” policy on the occupied West Bank in the same light as Russia’s illegal incursion into eastern Ukraine and annexation of Crimea, which likewise threaten political and military stability in the area, and further endangers world peace.

Since the U.N. vote, two United States Senators in particular, Ted Cruz (R-TX) and Lindsey Graham (R-SC), announced they will introduce legislation to withhold U.S. funding from the U.N. until it reverses Resolution 2334.

Though the U.N. charter mandates member states comply with the council’s decisions, Cruz and Graham have thrown a hissy fit and are refusing to share their toys because others have simply asked them to follow the rules to which all have agreed previously.

The United States represents one of the richest and most powerful nations in the world. With massive power and treasure propping them up, Cruz and Graham, along with many of their congressional colleagues, are attempting to impose their will by treading over the charter of the United Nations.

According to the United States Department of Justice, “bullying includes repeated harmful acts and a real or perceived imbalance of power.”

Cruz and Graham believe, as do other bullies, that their “real or perceived imbalance of power” automatically and unquestionably grants them the right to use their power and privilege as weapons rather than as means for good.

All U.S. legislators, upon taking their oath of office, “swear to preserve and defend the Constitution of the United States.” The Constitution gives us the foundation on which our country rests as a nation of laws. If one objects to any laws, our Constitution provides a mechanism by which we can work to change them.

Our founders, in their wisdom, did not give us the right to select which laws to follow and which to ignore. The United States government, for example, deployed federal troops to ensure that the Supreme Court’s 1954 Brown v. Board of Education school desegregation mandates as well as the provisions of the Civil Rights Act of 1964 were met in the face of local resistance.

Similarly, the United States as a U.N. member nation swears to abide by all Security Council resolutions even in instances where they may disagree. The United States and the United Nations cannot function without the overriding foundational principles in the rule of law, no matter how rich and powerful or impoverished and relatively less powerful are any given states.

Ted Cruz and Lindsey Graham, in their words and actions, clearly demonstrate the reasons why some people and entire nations see the United States as a bully nation.

We can do so much better in showing the world that we do, in fact, respect the United Nations and its charter, while still maintaining the ability to voice opposition, as do all member states, to selective proposals and declarations.