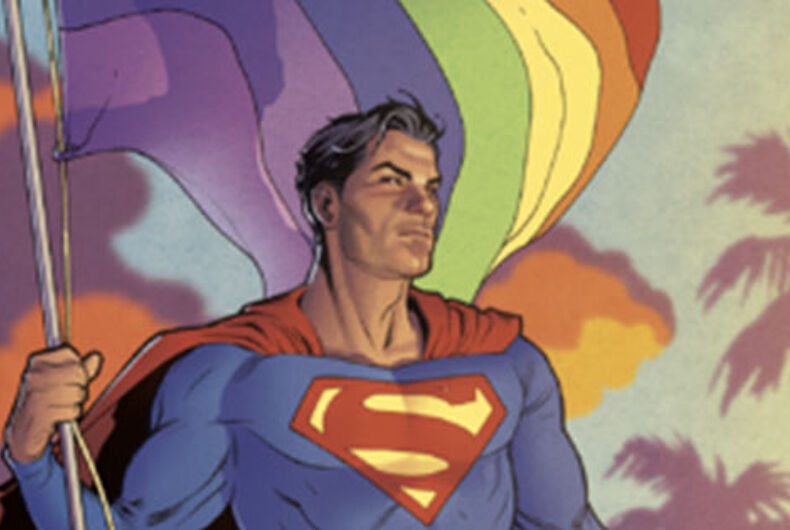 The characters of the Harry Potter novels cast a rainbow spell and Superman waves a Pride flag as they join forces with LGBTQ superheroes Midnighter and Batwoman in a new comic book now on sale: “Love is Love,” an anthology dedicated to the victims of the massacre at Pulse nightclub in June 2016.

All of the proceeds of the joint effort by IDW Publishing and DC Comics will go to Equality Florida, to benefit both the survivors and the families of the 49 people killed.

The book retails for just $9.99 and as LGBTQ Nation first reported, it is the first comic book in history to feature J.K. Rowling’s beloved characters with her blessing. The image drawn by DC Comics’ co-publisher Jim Lees is accompanied by a watercolor rainbow flag added by Mark Chiarello, a DC Comics vice president for art and design. Below the heroic group is a quote from Harry Potter and the Goblet of Fire, from headmaster Albus Dumbledore, who Rowling said was gay: “Differences of habit and language are nothing at all if our aims are identical and our hearts are open.”

DC Comics calls the finished product an “oversized love letter to the LGBTQ community,” according to Gay Star News.

The 144-page anthology “celebrating love in all its forms” is the brainchild of out comic book writer Mark Andreyko, familiar to fans of Batwoman and Wonder Woman.

“I was e-Harmony-ing people,” Andreyko told The New York Times when “Love is Love” was first announced. “Mixing and matching and seeing who felt right.”

He scored Damon Lindelof, Patton Oswalt, Phil Jimenez and Olivier Coipel, as well as other artists, all contributing their talents for free. Even out actor Matt Bomer is featured.

“I purposely said it would be a one-page thing to get people to commit,” Andreyko told the paper. ” As it turns out, each contributor was given a maximum of two pages. so they wouldn’t be overburdened with this volunteer project and the jobs that pay the bills.

Click here for more information and to buy your own copy.