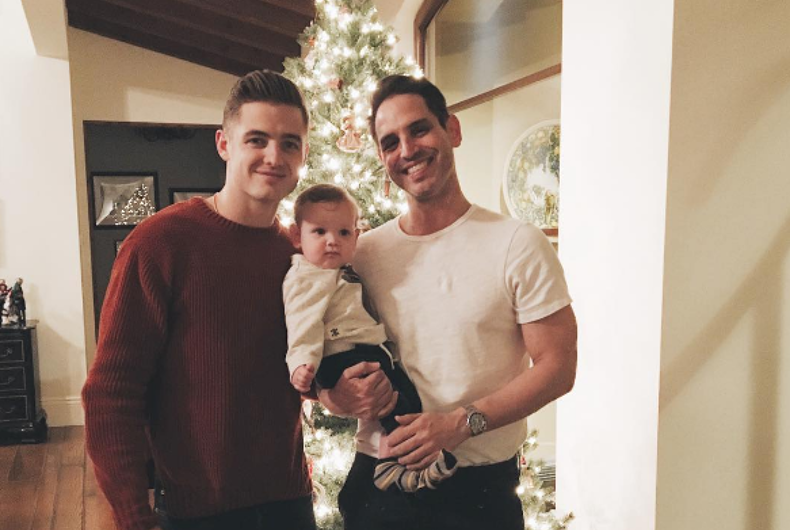 Robbie Rogers and Greg Berlanti with their son, Caleb.Photo: Instagram

The couple, who have been together since 2013, made the announcement in Instagram posts.

“Thank you to everyone before us that made this moment possible…I feel extremely lucky and blessed to end 2016 engaged to the love of my life,” Rogers wrote in his post.

Thank you to everyone before us that made this moment possible… I feel extremely lucky and blessed to end 2016 engaged to the love of my life. ❤ Happy New Year!

Berlanti, who has written and directed for shows such as “Dawson’s Creek,” “Arrow” and “Supergirl,” shared the same photo, with a caption of his own, in which he reflected on a big year.

“2016 was memorable for many reasons, for me it as the year my heart doubled in size. First, when my son Caleb was born. And second, a few days ago, when I got engaged to my soulmate,” he wrote.

Berlanti’s son Caleb was born in February, with the help of a surrogate.

It is with much pride and love that I introduce to the world my son, Caleb Gene Berlanti. Born February 18, 2016. There is nothing I've wanted more, or waited for longer, than to be a father. Achieving this dream would not have been possible without the love and support of my wonderful family and surrogate, incredible boyfriend, amazing friends and co-workers that encouraged me and helped me on this remarkable journey. Check back in approximately 25-30 years for the tell-all about how I screwed it all up, until then apologies for the over posting of baby photos. My heart is full forever.

“Though I dreamed of both those things happening, I’m not sure I truly believed they were possible,” Berlanti continued. “Thanks to the friends and family who helped me find my way to this moment in my blessed life. a happy and healthy 2017 to all.”

The perfect first Christmas for Caleb. ❤

Rogers came out in 2013 after retiring from soccer. He has since come out of retirement to play for Los Angeles Galaxy.

He recently shared a video of himself teaching Caleb how to kick.