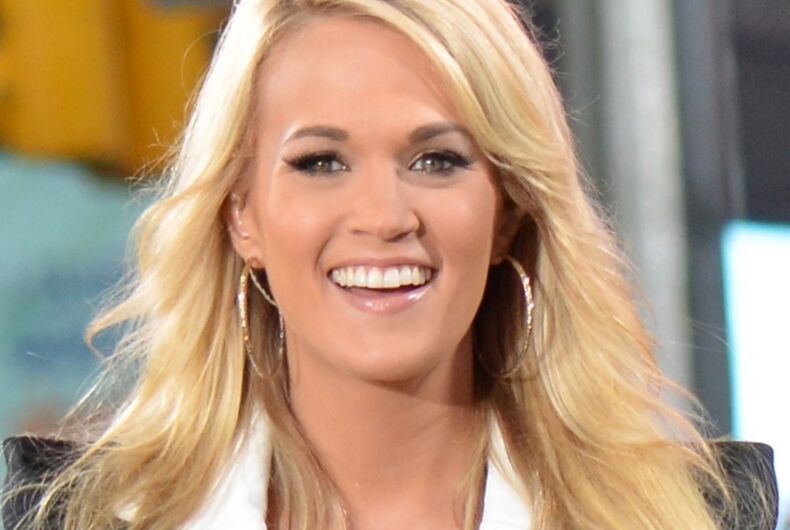 America Family Association president Tim Wildmon criticized Carrie Underwood’s appearance at a Christian conference because of the country star’s support for LGBT rights, just after discussing how the “thought police” was trying to declare Kim Burrell “an illegitimate human being.”

On the AFA’s radio show “Today’s Issues,” Wildmon decried responses to Kim Burrell’s homophobic tirade where she called gay people “perverted.” One of his co-hosts said that she would likely not win a Grammy because the “media elite” want to push her out of the public square. The co-hosts generally agreed that criticism of Burrell was suppressing her from expressing her “Biblical viewpoint.”

After that discussion, Wildmon and his co-hosts turned their attention to Carrie Underwood’s appearance at the Passion Conference. They said she should not have been allowed to appear there because “Carrie Underwood is openly embracing of homosexual marriage and the homosexual lifestyle” and Wildmon said her views were “not from God.”

One co-host said the problem was “allowing [Underwood] to get before 55,000 people and she’s well-known to be for gay marriage and for the gay lifestyle,” adding that her appearance “spoils the whole thing,” referring to the conference. At the end of the segment, the co-hosts generally agreed that her beliefs should have “disqualified” her from appearing at the conference.

Another co-host fondly remembered singer Sandy Patty, who after her 1992 divorce, according to the co-host, “disappeared for two years.”

Underwood told The Independent in 2012, “Our church is gay friendly. Above all, God wanted us to love others. It’s not about setting rules, or [saying] ‘everyone has to be like me’. No. We’re all different. That’s what makes us special. We have to love each other and get on with each other. It’s not up to me to judge anybody.”