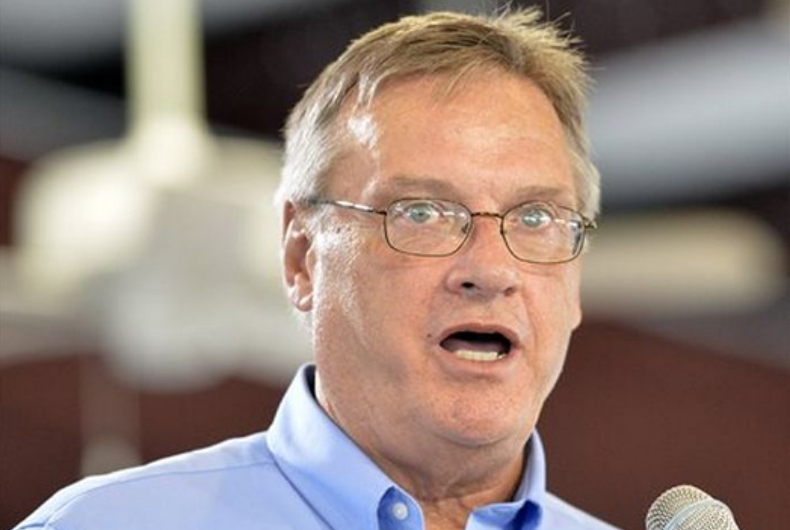 A Kentucky Democrat is pushing legislation that would prevent transgender people from using the bathroom that matches their gender identity and another bill that would allow religious people to have special protections against laws and orders they find objectionable. All this in spite of the fact that Republican leadership does not back such laws.

Rep. Rick Nelson introduced House Bill 105, a “religious freedom bill,” preventing anyone from having their “right of conscious” violated, and House Bill 106 requires public schools, state universities, and state and local governments to designate that bathrooms they control “only be used by persons based on their biological sex.”

Gov. Matt Bevin, a Republican, appears to not desire to go down the path that helped defeat former North Carolina governor Pat McCrory. The state’s House Bill 2, which requires trans people to use bathrooms and locker rooms matching the gender on their birth certificates in government owned buildings, has resulted in the loss of hundreds of jobs and millions in revenue due to boycotts.

He was asked in a press conference in December about the possibility of a so-called “bathroom bill” coming to his state.

“Why would we?” he asked. “Why would anybody need it? Is it an issue? Is there anyone you know in Kentucky who has trouble going to the bathroom? Seriously. Have you heard of one person in Kentucky having trouble taking care of business in Kentucky?”

He added that “the last thing we need is more government rules.”

Nelson admits he has no awareness of either issue being a problem in Kentucky, yet said “we want to be vigilant about what could happen.”

The “religious freedom bill” is similar to a proposal approved by the Republican-led Senate last year that would prohibit the government from compelling services or actions from anyone citing it conflicts with a strongly held religious belief, and would prevent businesses from being punished for violating local ordinances that prohibit discrimination based on sexual orientation or gender identity, reports the Lexington Herald-Reader.

They also note that the Republican-led state Senate backed a bill limiting transgender students to school bathrooms that match their biological sex in 2015, but that GOP leaders of the House and Senate have made clear they wish to focus on economic, not social, issues in the new year.

“The effect of passing this type of discriminatory legislation is clear. It will cost the state millions of dollars,” Chris Hartman, director of Kentucky’s Fairness Campaign, said in a statement. “If Kentucky lawmakers want to remain focused on improving our commonwealth’s economy, this is exactly the legislation they should avoid. Furthermore, if Kentucky fans hope to host NCAA College Basketball championship games in the future, they must speak out against HB 105 and HB 106.”

“I find it fascinating that it’s someone in the minority party who introduced this,” Hartman said. “And I hope the chances they pass are slim. After all, the governor called the anti-trans bathroom bill silly and unnecessary.”