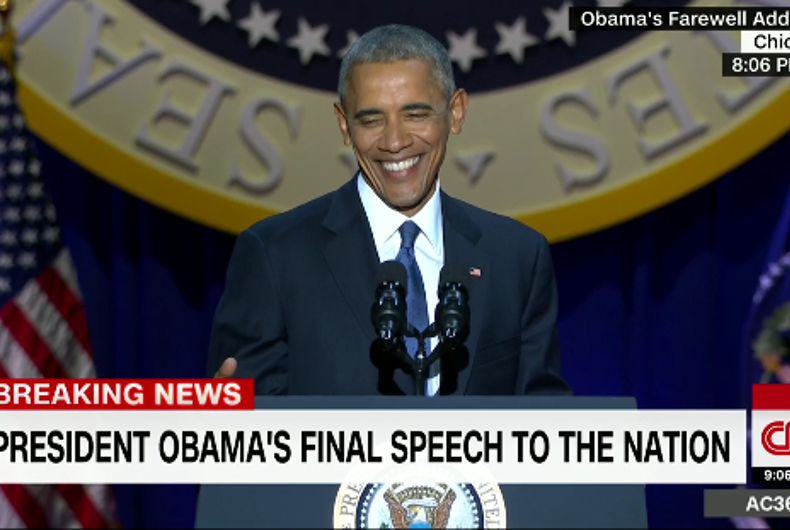 President Barack Obama delivered his final address to the American people on Tuesday, Jan. 10 in Chicago, urging the country to keep holding on to hope and the belief in their power to bring change.

Obama also called for the people to continue fighting for that change, in the shadow of the upcoming Donald Trump administration.

He admitted that “we’re not where we need to be,” a bold statement from an exiting president.

“All of us have more work to do. After all, if every economic issue is framed as a struggle between a hardworking white middle class and undeserving minorities, then workers of all shades will be left fighting for scraps while the wealthy withdraw further into their private enclaves. If we decline to invest in the children of immigrants, just because they don’t look like us, we diminish the prospects of our own children – because those brown kids will represent a larger share of America’s workforce. And our economy doesn’t have to be a zero-sum game,” he said.

“Going forward, we must uphold laws against discrimination – in hiring, in housing, in education and the criminal justice system. That’s what our Constitution and highest ideals require. But laws alone won’t be enough. Hearts must change. If our democracy is to work in this increasingly diverse nation, each one of us must try to heed the advice of one of the great characters in American fiction, Atticus Finch, who said, ‘You never really understand a person until you consider things from his point of view…until you climb into his skin and walk around in it.’

“For blacks and other minorities, it means tying our own struggles for justice to the challenges that a lot of people in this country face – the refugee, the immigrant, the rural poor, the transgender American, and also the middle-aged white man who from the outside may seem like he’s got all the advantages, but who’s seen his world upended by economic, cultural, and technological change.

“For white Americans, it means acknowledging that the effects of slavery and Jim Crow didn’t suddenly vanish in the ‘60s; that when minority groups voice discontent, they’re not just engaging in reverse racism or practicing political correctness; that when they wage peaceful protest, they’re not demanding special treatment, but the equal treatment our Founders promised.

“For native-born Americans, it means reminding ourselves that the stereotypes about immigrants today were said, almost word for word, about the Irish, Italians, and Poles. America wasn’t weakened by the presence of these newcomers; they embraced this nation’s creed, and it was strengthened.

“So regardless of the station we occupy; we have to try harder; to start with the premise that each of our fellow citizens loves this country just as much as we do; that they value hard work and family like we do; that their children are just as curious and hopeful and worthy of love as our own.”

It was a call for unity and a repudiation of the separatism Trump and his ilk have been pushing all at once.

Later in the speech he we insisted that we “cannot withdraw from global fights – to expand democracy, and human rights, women’s rights, and LGBT rights – no matter how imperfect our efforts, no matter how expedient ignoring such values may seem.”

President Obama became visibly emotional when speaking of his wife, First Lady Michele Obama, and his daughters, Malia and Sasha.

“Michelle – for the past twenty-five years, you’ve been not only my wife and mother of my children, but my best friend,” he said. “You took on a role you didn’t ask for and made it your own with grace and grit and style and good humor. You made the White House a place that belongs to everybody. And a new generation sets its sights higher because it has you as a role model. You’ve made me proud. You’ve made the country proud.”

.@POTUS tells @FLOTUS: “You made the White House a place that belongs to everybody…you have made me proud.” https://t.co/PTl7bwvaSd

“Malia and Sasha, under the strangest of circumstances, you have become two amazing young women, smart and beautiful, but more importantly, kind and thoughtful and full of passion,” he continued. “You wore the burden of years in the spotlight so easily. Of all that I’ve done in my life, I’m most proud to be your dad.”

He also gave hope by spotlighting the progressive ideals of the next generation.

“You believe in a fair, just, inclusive America; you know that constant change has been America’s hallmark, something not to fear but to embrace, and you are willing to carry this hard work of democracy forward.  You’ll soon outnumber any of us, and I believe as a result that the future is in good hands,” he said.

President Obama on the next generation of Americans: "The future is in good hands." https://t.co/7liFtadVsl https://t.co/V5SummyCui

He concluded by saying that it was an honor to serve and promised that he will continue in the fight for the ideals he worked toward as president.

“My fellow Americans, it has been the honor of my life to serve you. I won’t stop; in fact, I will be right there with you, as a citizen, for all my days that remain. For now, whether you’re young or young at heart, I do have one final ask of you as your President – the same thing I asked when you took a chance on me eight years ago.

“I am asking you to believe. Not in my ability to bring about change – but in yours.

“I am asking you to hold fast to that faith written into our founding documents; that idea whispered by slaves and abolitionists; that spirit sung by immigrants and homesteaders and those who marched for justice; that creed reaffirmed by those who planted flags from foreign battlefields to the surface of the moon; a creed at the core of every American whose story is not yet written:

“Thank you.  God bless you.  And may God continue to bless the United States of America.”

Read the full transcript of the speech here.

Watch the full speech below.

Watch Obama’s reflections ahead of the farewell speech below.

The greatest queer icons still with us in 2017