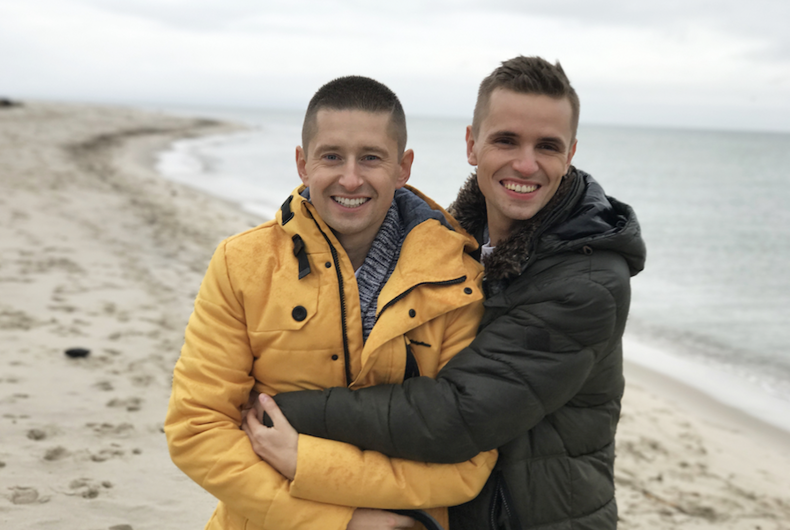 A gay couple denied the right to marry in their native Poland recently won permission to wed in Portugal, and it’s all thanks to their haters.

Polish couple Jakub Kwiecinski and David Mycek have made global headlines for their viral fan videos that seek to increase the visibility of gays and lesbians in the anti-gay country. But not all of that attention has been positive. Jakub told LGBTQ Nation that the release of their video for Roxette’s “Some Other Summer” sparked hateful comments and even death threats.

“Our video became popular in Poland but fame came in pair with hate and threats,” Jakub said. “We received many messages like: ‘You should be sent to gas chamber,’ ‘I will cut your throat when I meet you,’ ‘Your neighbors are coming after you.’”

But the couple shrugged it off and continued making fan videos, including one for RedOne’s “Don’t You Need Somebody.”

A video the pair produced to a popular Polish song landed them on the cover of local newspapers amid calls for boycotts of the musician Beata Kozidrak for sharing their video to her song.

“Polish conservative media attacked her and appealed to boycott her music,” he explained. “[The hate] is really nasty but it doesn’t break us like it was a few months ago. Now it gives us a motivation to try harder.”

But the haters don’t just fuel the couple’s fight for equality, Jakub and David believe it also helped persuade Portuguese officials to grant them an exemption to the usual document requirements. Typically, foreigners looking to marry in Portugal must provide documentation affirming there is no obstacle to their marriage in their home country (such as already being married).

“All foreigners getting married in Portugal require this document except UK nationals,” Jakub told LGBTQ Nation. “When you apply in Poland for it you need to put the name of your partner. They reject all the homosexual applications.”

But after a year of effort, which including showing officials international press coverage from LGBTQ Nation and other publications, Portuguese officials granted their request. Jakub said he isn’t sure what exactly persuaded officials, but believes that most people in Portugal are accepting.

“In my opinion, Portuguese are very friendly and open-minded,” he said, “so it had to be shocking for them how people in [Poland] can treat others just for their love.”

The couple plans to wed in June on the Portuguese island of Madeira, where they fell in love.

“If we can’t get married in our country, we wanted to choose a place that is close to our hearts,” David explained. “There are countries where it is easier to get marriage permission, but we chose Madeira because we fell in love with this Island few years ago, and since then we visit it every year. ”

While a Polish TV company reached out to the couple about filming their wedding to make a documentary, Jakub told LGBTQ Nation that they want to keep it more private.

“We thought it through and decided that our story might be inspired for other people in our country and we will take our friend with us who will record it and we might do something on our own to share with other people,” he said.