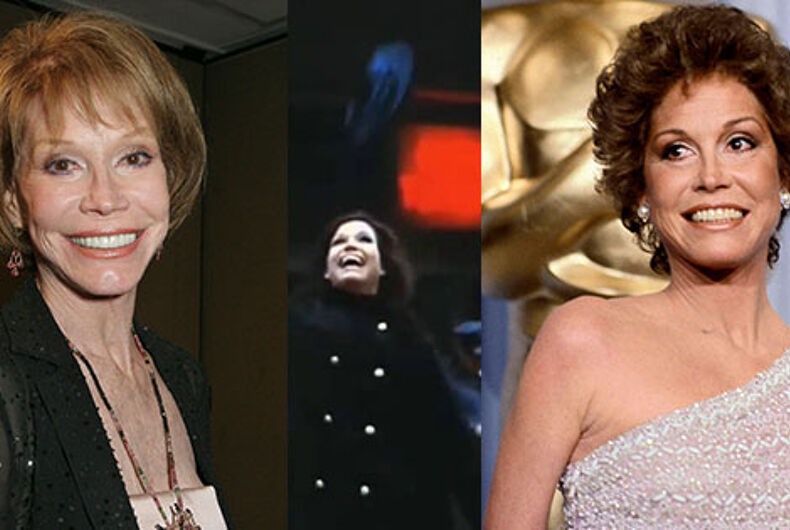 Mary Tyler Moore, known to generations for playing a spunky, independent woman who didn’t always do things right but always had the best intentions, died Wednesday. She was 80.

“Today, beloved icon, Mary Tyler Moore, passed away at the age of 80 in the company of friends and her loving husband of over 33 years, Dr. S. Robert Levine,” spokeswoman Mara Buxbaum said in a statement to the Hollywood Reporter.

The six-time Emmy Award winner was reported to be in grave condition early Wednesday. In 2012, Moore had elective surgery to remove a meningioma, or benign tumor of the lining tissue of her brain. She had kept a mostly low profile in the intervening years, appearing once with her “Mary Tyler Moore Show” costars on Betty White’s show, “Hot in Cleveland,” in 2013.

From various films to Laura Petrie on “The Dick Van Dyke Show” to Mary Richards on her eponymous series, her roles catapulted her to stardom. As a television icon she swiftly became America’s TV sweetheart, only to earn a prized Oscar nomination for playing an ice queen of a grieving mother with a broken heart in Robert Redford’s Ordinary People.

Moore was born in Brooklyn but grew up in Los Angeles and dreamed of becoming a dancer. Her first part was to play a dancing kitchen appliance, Happy Hotpoint the elf.

She then starred in a now forgotten Universal motion picture, X-15 in 1961,

But that same year she landed a part on The Dick Van Dyke Show and made her mark at age 23, cast as a housewife and mother who more often than not wore capri pants instead of a dress. As THR pointed out, that stunned some American viewers, and thrilled young women who saw in Moore a role model.

That was cemented further a decade later in her next series, pitched by her second husband Grant Tinker to CBS: a single working woman making her way in the world. She was originally intended to be a divorcee, but to assuage nervous network executives Mary Richards became a woman who had broken off an engagement. With its award-winning ensemble cast, the show was a hit, and was one of the first series to tackle the idea that it was okay to be gay.

Moore also appeared on the Broadway stage, winning a Tony Award for Whose Life Is It Anyway?, which opened in 1980 and ran for 96 performances.

In 1995, Moore acknowledged in her first autobiography that she was an alcoholic, and in the second she revealed her life with diabetes.

Despite the happy go lucky character she often played, Moore’s life was tinged with tragedy. In 1978, her sister, Elizabeth, died at age 21 from a drug overdose. Her son, Richie, from her first marriage, died of an accidental self-inflicted shotgun wound in 1980 at the age of 24. And her brother, John, died of liver cancer in 1992. He was 47.