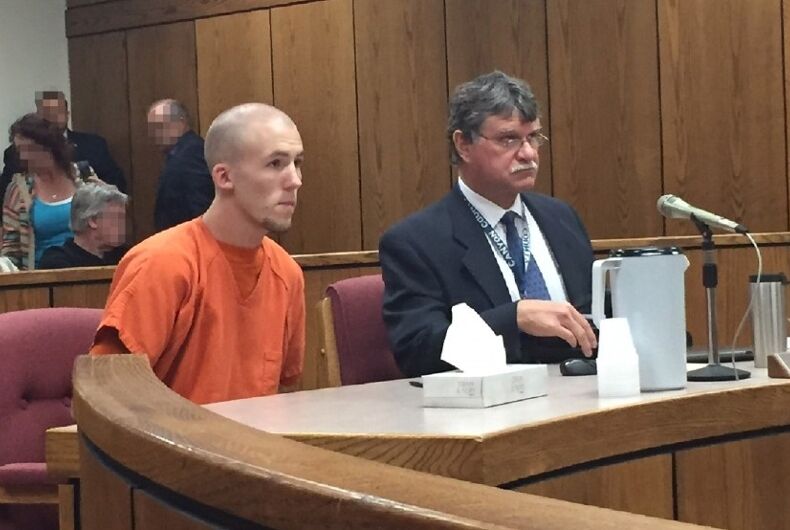 Kelly Schneidor on trial for the killing of Steven NelsonPhoto: KBOI

BOISE, Idaho (AP) — An Idaho man charged with a federal hate crime in the beating death of a gay man pleaded not guilty in Boise’s U.S. District Court on Tuesday.

A March trial was set for 23-year-old Kelly Schneider, who pleaded guilty to first-degree murder in state court Monday.

He was indicted earlier this month on the hate crime charge that accused him of attacking Steven Nelson last year because he was gay.

Few documents have been filed in the federal court case so far, but the details of the attack are outlined in the related state court case: Prosecutors say Schneider used an online personals ad on Backdoor.com to lure the 49-year-old Nelson to a remote recreation area near Lake Lowell in southwestern Idaho.

There Nelson was robbed, stripped, beaten and left.

Despite being critically injured, naked and barefoot, Nelson managed to walk to a home about a half-mile away for help. He was able to give police information before he died a few hours later.

Schneider pleaded guilty Monday in state court to first degree murder. But Idaho’s state hate crime law doesn’t extend protections to people who are gay or lesbian, and so Schneider was transferred to federal custody to face the hate crime charge.

Schneider was one of four men charged in connection with the attack in Idaho’s state courts. On Monday, Schneider pleaded guilty to first-degree murder, saying that he intended to rob Nelson but not kill him. He also acknowledged that he kicked Nelson repeatedly and that his actions caused Nelson’s death.

In exchange for his guilty plea, state prosecutors agreed to drop robbery, theft and conspiracy charges. He now faces life in state prison, as well as a possible life sentence in federal prison if he is convicted on the federal hate crime charge.

Schneider has a lengthy criminal history in Idaho, including marijuana-related charges while he was still a minor and a series of drug, burglary and theft charges over the last five years. But the only other violent crime on his record is an injury to an officer conviction that appears to stem from his time spent in the Canyon County jail in 2012.

Still, Deputy Canyon County Prosecutor Chris Boyd said during Schneider’s state court arraignment last year that he believed Schneider had lured and beaten other victims many times before, and the sheriff’s office said at the time that they had received tips about others who may have been victimized in the same way. However, no additional cases have been filed against Schneider in state court.