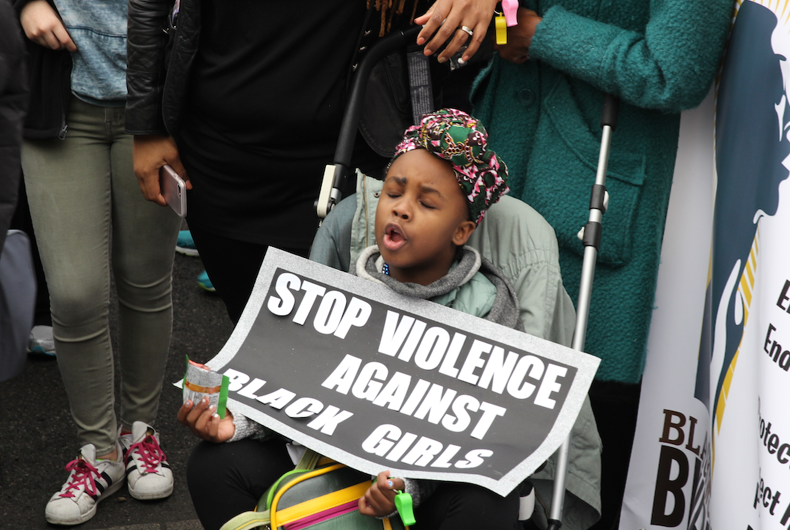 The number of people who took to the streets for Women’s March on Washington in D.C. and its sister marches across the country and the globe far exceeded the expectations of local and national organizers.

In a sea of pink cat-eared “pussyhats” nearly 5 million people from all seven continents carried placards with slogans like “Make America Sane Again,” “Men of Quality do not FEAR Equality,” “Viva La Vulva” and “I am no longer accepting the things I cannot change. I am changing the things I cannot accept,”, showed a counter-inauguration to the nation’s newly elected president’s vision for the country and world.

What was also on display at the marches was a resurgence of feminism that was multi-generational, highlighting an amalgam of issues – abortion, equal pay, immigration rights, environmental protection, transgender rights, and police brutality to name a few – that might possibly be the beginnings of a fourth wave called “intersectional feminism,” embraced by both women and men.

Unlike previous women’s marches and waves of feminism that had primarily been intentionally exclusive women’s country clubs that spoke to Betty Friedan’s feminine mystique of upper-crust “pumps and pearls” wearing white women, this march was intentional in bringing various women and their voices and concerns to the organizing table.

Tamika Mallory, one of the D.C. organizers and an African-American, told Joy Reid of MSNBC the morning of the march that by devising an intersectional policy platform centering the voices of women of color “you set the agenda or you become an agenda item.”

However, while women of color asked white women “to listen more and talk less” and check their white privilege at the proverbial door as an organizing principle, there was neither consensus nor solidarity among the white sisterhood majority with that objective.

“Can’t we rise above the sniping about ‘privilege,’ ‘white feminism,’ ‘intersectionality,’ and hierarchies of grievance in the face of Trump and the dangers he poses to the American and international liberal world order and women everywhere?” Emma-Kate Symons wrote in her op-ed piece “Agenda for Women’s March has been hijacked by organizers bent on highlighting women’s differences” for Women in the World in association with The New York Times.

Fearing that once again a white sisterhood would exploit not only our suffering to legitimate their cause but also our black and brown faces for photo-op moments where we are seen and not heard or, if heard, but not taken seriously, mixed feelings erupted among women of color about attending the marches.

In Jamilah Lemieux’s op-ed “Why I’m Skipping The Women’s March on Washington” in Colorlines wrote “Much of the post-election news cycle was dominated by White folks wringing their hands: How could this happen? Why did it happen? There was lots of weeping and wailing from women who could get the answers to those questions by simply asking their relatives, friends and partners who put Trump in power… And just what would this ‘million’ women be coming together to march about—their mothers, sisters, homegirls and friends who elected Trump in the first place?”

The nagging question many women of color who did (and didn’t) attend marches want to know is where was this same energy and white sisterhood going to the polls in November?

53% of white women voters cast their ballots for Trump whereas 94% of black women, in particular, cast theirs for Hillary.

Many women of color did indeed attend the marches. Angela Peoples went to the march in DC wearing a Trump-like red hat that read “Stop Killing Black People” and carrying a sign that read “White Women Voted for Trump.”

However, it must be noted that there is a difference between marching for everyone’s civil rights versus marching because white women now recognize a diminishment of their white privilege.

For example, white women who voted for Trump were also at the DC march. Many of these women shared with me that they voted for him for economic reasons. While many of them didn’t mind Trump cutting Obamacare, they were upset to learn that the Affordable Care Act, which they now receive but will be repealed, was the official name for Obamacare.

The Boston march turned out a record number of nearly 200,000. But a white female friend of mine troubled by the complexion of the march sent me an email stating the following: “Maybe you can answer this question for me. There was a lack of blacks and people of color at ‘The March’…WHY? What can be done to motivate more to ‘come out’? Am I naive?”

While I can’t speak for all black people, I can say that a lot of African-American men and women didn’t show up for sister marches in predominantly white towns and cities, in spite of the marches’ internecine tensions, because the practice of “Stop and Frisk” is overwhelmingly acted upon people of color.

However, it’s these sort of questions like my friend asked that helps forge change in building a stronger sisterhood and a safer world.