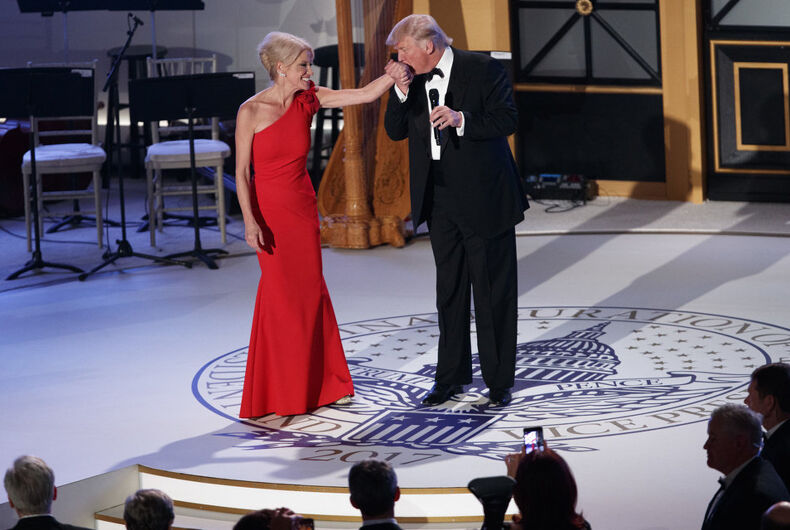 According to several onlookers and senior correspondent at Fox News, Charles Gasparino, President Donald Trump’s top adviser Kellyanne Conway punched a man in the face several times with a closed fist at an inaugural ball.

Just hours after the new president was sworn in on Jan. 20, Conway rushed into a fight between two men and punched what the Daily News calls “a tuxedo-clad man at an exclusive inauguration ball” with a closed fist at least three times, according to sources they spoke to who witnessed the violence.

The Daily News reports that there was no immediate response from a Trump spokesperson regarding the incident, and that it was not clear what triggered the fight between the two men.

“Inside the ball we see a fight between two guys in tuxes and then suddenly out of nowhere came Trump adviser Kellyanne Conway who began throwing some mean punches at one of the guys,” Gasparino wrote on Facebook. “Whole thing lasted a few minutes, no one was hurt except maybe the dude she smacked. Now I know why Trump hired her. By the way, I exaggerate none of this.”

In that same post, Gasparino recounts an encounter he and Trump supporter Scott Baio, whom he calls a “pal,” had with what he calls “a bunch of anarchist thugs.” He says that after they asked Baio if he is a fascist and making an aggressive move toward them, Gasparino pushed them away.

Trump was seen encouraging violence at his rallies a number of times during the campaign, as you can see in the video below, via The New York Times.