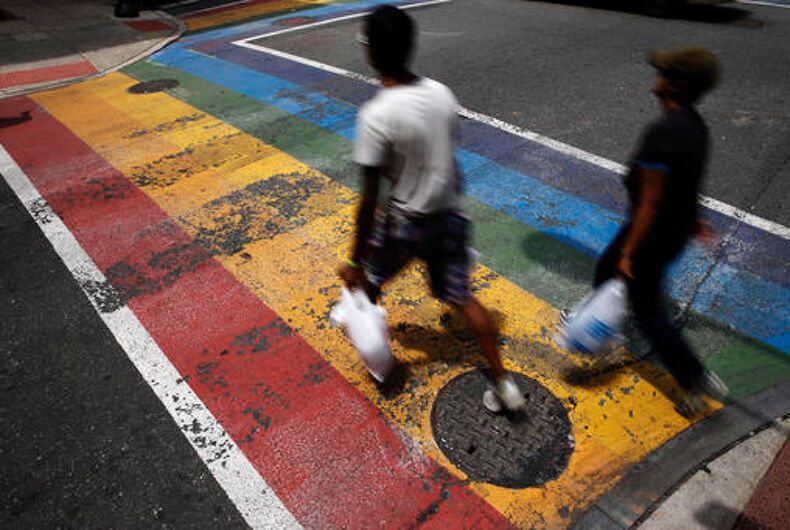 FILE - In this June 17, 2016, file photo, people walk across a rainbow crosswalk painted in support of the LGBT community in the Gayborhood, a gay-friendly section of Philadelphia. The Philadelphia Commission on Human Relations recommended Monday, Jan. 23, 2017, that bars and nonprofit organizations in Philadelphia's gay neighborhood undergo training for racial bias and hire more diverse staff, after a new city report found women, minorities and transgender people have felt unwelcome and unsafe in the Gayborhood for decades. Photo: (AP Photo/Matt Rourke, File)

PHILADELPHIA (AP) — Women, minorities and transgender people have felt unwelcome and unsafe in Philadelphia’s gay neighborhood for decades, according to a city report issued Monday.

To address the issue, the Philadelphia Commission on Human Relations recommended that Gayborhood bars and nonprofits undergo training for racial bias and hire more diverse staff. The agency has issued an action plan for the next three months and said organizations that do not cooperate could be punished or face legal action.

“It is maybe not as palpable as it was, but it’s still there,” said Mayor Jim Kenney, a lifelong resident of the city. “We need to do everything we can as a government to hold it up.”

The issue of racism in the Gayborhood gained renewed interest in September after a video clip surfaced showing a Gayborhood club owner using a racial slur. Black gay patrons say they have been carded and subjected to exclusionary dress codes.

Kenney was swift to condemn the allegations and has vowed not to patronize the Gayborhood until changes were made.

The city held a public hearing in October and compiled a report based on verbal and written testimony from community members. Among its findings were that the business practices of Gayborhood bars resulted in numerous reports of racism and discrimination and that former and current employees at LGBTQ social service agencies have reported patterns of discrimination at those agencies.

“In every movement, change starts from the community,” said Rue Landau, the executive director of the Commission on Human Relations. “We want you to know: We heard you, thank you, and the time for change is now.”

The report also issued several recommendations, including that bar owners and staff as well as board members and staff at two city nonprofits receive training on implicit bias and the city’s fair practices rules.

Businesses and nonprofits will be required to display the city’s fair practice ordinance within 30 days and undergo training within the next three months. The commission has also begun testing at bars to determine whether discriminatory practices persist.

The commission will investigate complaints, and businesses or agencies with city contracts found in violation could be subject to remedies including “compensatory and punitive damages, injunctive relief and attorney’s fees,” the report stated.

Black and gay activists who protested Gayborhood establishments and attended Monday’s press conference called the report a first step that makes the city accountable to its gay community.

“Now that they’ve stated that they will shut down (organizations) that are not complying in terms of with what is expected … if that does not happen, (we) will be present and we will shut it down ourselves,” said Shani Akilah Robin, founder of the Black and Brown Workers Collective. “We will be watching them every step of the way.”