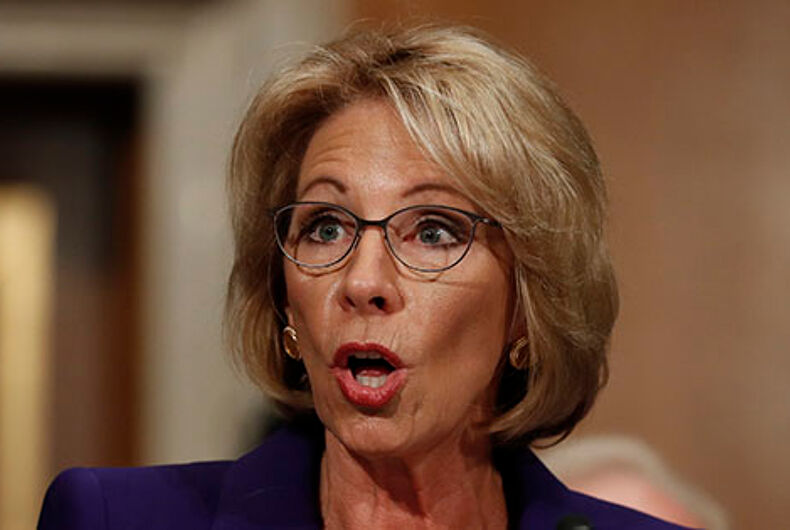 While progressive forces fight the nomination of Michigan philanthropist Betsy DeVos to be Donald Trump’s Education Secretary, one renowned group of journalists is calling one line of attack unfounded. PolitiFact Wisconsin researched a claim by openly gay Rep. Mark Pocan that DeVos and her family “have donated extensively to groups which promote the idea that students who identify as LGBT must undergo ‘conversion’ therapy.”

Conversion, reparative, or “ex-gay” therapy has been denounced by both the American Psychiatric Association and the American Academy of Family Physicians. Although some Christian groups advocate for its use — right-wing preacher Tony Perkins won its inclusion in the Republican National Committee’s platform last summer — the practice is outlawed in five states and the District of Columbia; those are facts not mentioned in the report. 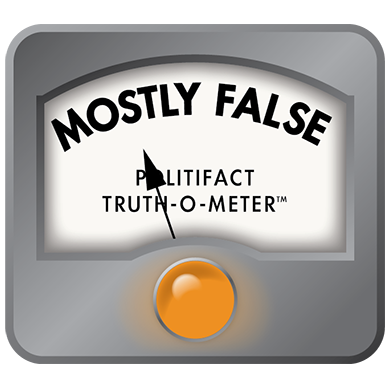 The result of Politifact’s investigation was that Pocan’s claim is “mostly false.”

A spokesman for Rep. Pocan told LGBTQ Nation the congressman “disagrees with the conclusion of Politifact’s analysis, and the goal of the letter was to shed light on Betsy DeVos and her ties to anti-LGBT activists who support conversion therapy.”

Politifact, which is owned by the Tampa Bay Times newspaper company and partners with more than a dozen papers and TV stations across the country, was launched almost ten years ago and now boasts more than 13,000 fact-checks in its online database. So they’re well-equipped to separate “alternative facts” from reality.

What researcher Tom Kertscher and editor Greg Borowski found was that the claim by the Wisconsin congressman contained “only an element of truth.”

Here’s what Rep. Pocan said in a letter he sent to leaders of the Senate Health, Education, Labor and Pensions Committee, which was also signed by four co-chairs of the Congressional LGBT Equality Caucus:

“[DeVos] and her family have donated extensively to groups which promote the idea that students who identify as LGBT must undergo “conversion” therapy and have also affiliated with groups that oppose anti-bullying legislation. The next secretary of education must represent all students in our country. Anyone who promotes such fervently anti-LGBT viewpoints is wholly unqualified to serve as the secretary of education.”

Although Pocan didn’t mention DeVos’s personal beliefs regarding conversion therapy, DeVos testified at her hearing that she has “never believed in that.”

But Focus on the Family, one of two groups cited by Pocan, says it should be available for people who have “unwanted homosexual attractions.”

The group, based in Colorado, was once in league with Perkins’ Family Research Council, and Politifact confirmed that from 2003 to 2015, a foundation run by DeVos’s relatives — the Edgar and Elsa Prince Foundation of Holland, Mich., — gave $5.7 million to Focus on the Family. DeVos testified at her Senate confirmation hearing that the foundation’s listing of her as its vice president was a “clerical error.”

That aside, what motivated the “mostly false” ruling was the absence of evidence that these groups believe that LGBTQ students must undergo conversion therapy. A spokeswoman for the Southern Poverty Law Center told Politifact the center is not aware of either group making such a statement.

What Focus on the Family did tell Politifact, through a spokesperson, is that “many individuals — including students — with same sex-attractions find those feelings to be in conflict with their faith and Focus on the Family strongly supports their right to seek help from licensed mental health professionals as they work to resolve this conflict and steward their sexuality according to their religious beliefs.”

But Politifact ruled even that falls short of Pocan’s claim that the group promotes the idea that LGBTQ students must undergo it.

For more, read the Politifact report by clicking here.

Editor’s note: this story was updated with a quote from a spokesman for Rep. Pocan.