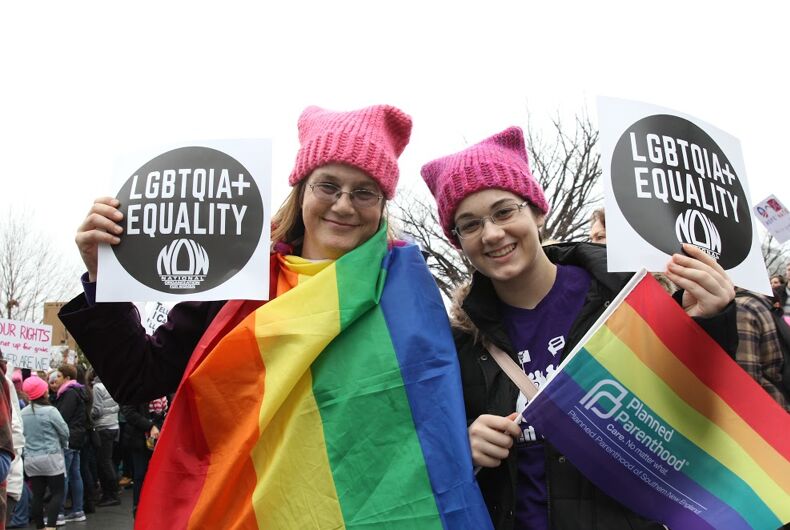 Hundreds of thousands of nasty women grabbed Washington by the streets on Saturday at the Women’s March to unify against misogyny, racism, homophobia and the Trump administration.

Initial estimates from organizers of 200,000 protesters fell short by 300,000, causing overwhelming lines at the Metro and flooding streets beyond the planned march route to the White House. Thousands more protested in cities across the U.S., from New York City to Portland, Oregon.

Although Trump has yet to tweet about the Women’s March, dozens of performers and speakers came to the nation’s capital to voice their support, including J. Bob Alotta of Astraea Lesbian Foundation for Justice, Madonna, Maryum Ali and Cecile Richards of Planned Parenthood.

A collective roar resounded throughout Washington, as anti-Trump protesters signaled they were the noisy majority.

“I’m Mexican, I’m gay and I’m a journalist,” Oscar Lopez said. “Those are three of the most vilified groups in the last six months. I’m not American, so it’s important from a global perspective for the world to see that the U.S. isn’t Trump.”

Below are more voices from the day’s march.

Indiana Sobol with her sister, Reeve Sobol. “I have friends who don’t have the same ability to come out with the [Pride] flag and protest because they are still in the closet,” Reeve said. “I run a GSA at my school and saw how devastated and scared everyone was,” Indiana said. “I have the ability to come here and protest for myself and many others who couldn’t make it out today.”

“I’m proud to be with him.” Oscar Lopez with his boyfriend, Joseph Huff-Hannon

“As a gay woman in the military, I cannot vote against my own interests, and I shouldn’t have to go through shock therapy.” This protester did not want to be identified by name, but she used the hashtag #canyouimpeachavicepresident.

“Bigotry does not have a mandate,” said Cassandra Martineau, who called herself a fabulous trans activist. She is pictured with her daughter, Annastasia.

Two married couples from Florida. From left: Melissa Rhodes, Valerie Fisher, R.A. Larizza and Marina Hodgini. Rhodes and Fisher are board members of the only LGBTQ youth initiative in Manatee County, Florida.

“I feel like we all let things go too far and that’s one reason so many people are here,” said Hannah Lichtenstein, artist of the “Hands off” poster.

From left: East-coasters Mariel Essick with her mother Marty Essick, and Zia Bowen. “This was a really peaceful march,” Mariel said. “Everyone’s so cordial. I’ve said ‘Excuse me’ at least 50 times today. This woman had a sleeping baby in a stroller, and as she was walking, I swear it was like Moses parted the Red Sea. That’s how you know it’s a woman’s March.

Chris Hecq with her friend, Quinn Monette, whom she met at William & Mary College. “I feel really energized,” Hecq said. “It’s a shared vision of togetherness and it’s so rewarding to see so many supportive people in a public place,” Monette added.

Nipples drew out the demand for the desexualization of the female body.

All photos by Taylor Goebel/MNS.

Women’s March on Washington draws hundreds of thousands in D.C., around the world

10,000 people march in Connecticut in support of women