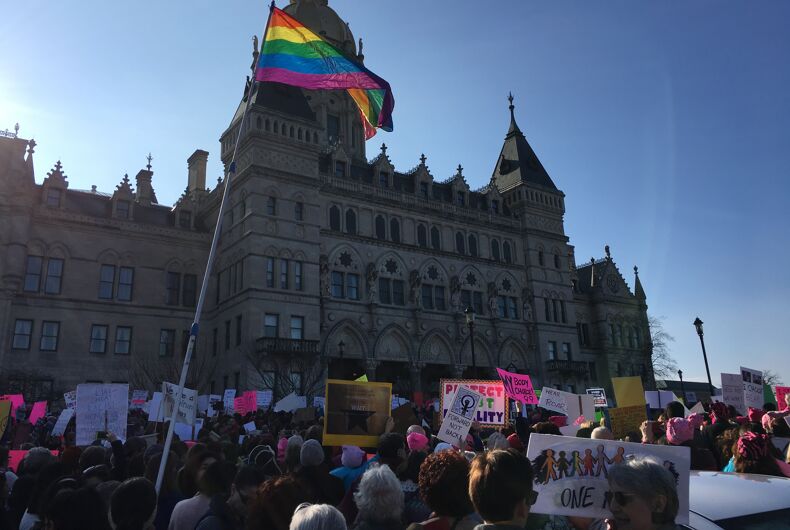 One of the marches around the world in response to the inauguration of President Donald Trump drew an estimated 10,000 people to Connecticut’s Capitol in Hartford Saturday, with a crowd so enormous that hundreds of demonstrators bearing signs in support of LGBTQ and reproductive rights spilled over into adjacent Bushnell Park.

One Connecticut mom, Lynn, told LGBTQ Nation she was there on behalf of her 15-year-old transgender daughter, who recently began her transition. Transgender Americans by and large are concerned that the Trump administration will not show the same support for their rights as had the Obama administration.

By far, most of those in attendance were women, and a huge contingent were out and proud. or allies. Under a cloudless, bright sunny sky, the grounds of Hartford’s historic citadel of government were packed with moms, grandmothers, sisters, girls and many infants, many of those in attendance wearing hand-knitted “pussy hats.” Thousands of women who took part did not come alone, bringing their partners, friends, fathers, brothers, sons and husbands to hear speakers defend the rights of women.

Here are just some of the images captured by LGBTQ Nation, as well as some tweets of the Democratic leaders who spoke, including Gov. Dannel Molloy.

.@GovMalloyOffice fires up the crowd in Hartford. 10,000 strong from all backgrounds, sending a peaceful message. pic.twitter.com/jyIaPW9jjh

Sarah Aldrich of Hartford invites people to sign her poster as a sign of solidarity. "Feminism is for everybody" pic.twitter.com/T9tD9iNtXU

Hundreds making their way to the Capitol for the Women's March in #Hartford #womensmarchct pic.twitter.com/PbzB6sOHW4