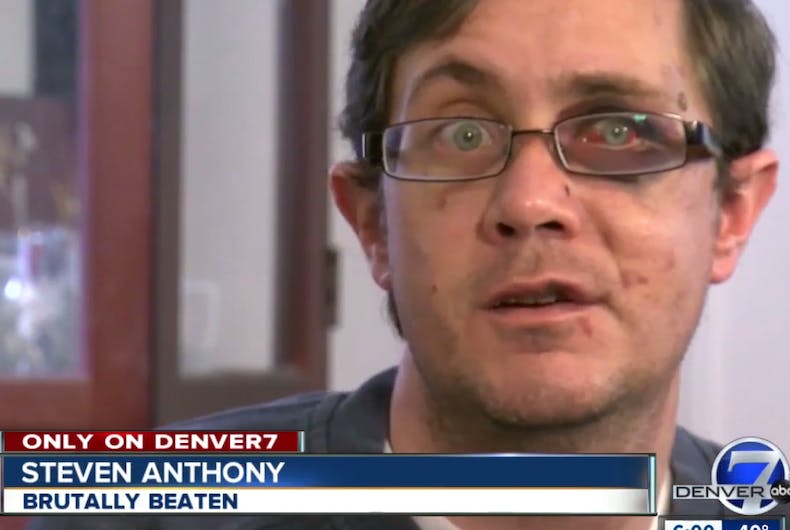 Steven Anthony was nearly beaten to death by a man he considered a friend. Photo: Screenshot

A gay man was nearly beaten to death by a former Marine in Fort Collins, Colorado.

The victim, Steven Anthony, said that he went to Vincent Ramirez’s home after a night of drinking. Anthony said he considers Ramirez a friend.

Anthony told Denver7, “We were talking about this woman and how much he was in love with her and how he needed to back off a little bit. I said, ‘You know Vince, if you do happen to be gay, it’s OK, I’m here for you.’ We think that’s kind of what set him off.”

“I kind of remember sitting at the kitchen table and the last thing, just getting clocked in the back of the head with some kind of an object,” Anthony said. He said that Ramirez then choked, stomped, and beat him for several minutes.

Anthony said he lost consciousness and then came to. He knew that he had to escape. “I remember hitting the side and laying in that puddle and him saying, ‘I’m going to go get my sword,’ and just knowing that I wasn’t going to get out of there if I didn’t get up and I didn’t run.”

He escaped out the back door and called Uber for help.

Anthony has a broken nose, broken orbital socket, and a sprained abdominal wall. A GoFundMe page was set up to help with soaring medical costs.

Ramirez has been arrested for second-degree assault and felony menacing. Police are investigating this as a possible hate crime.