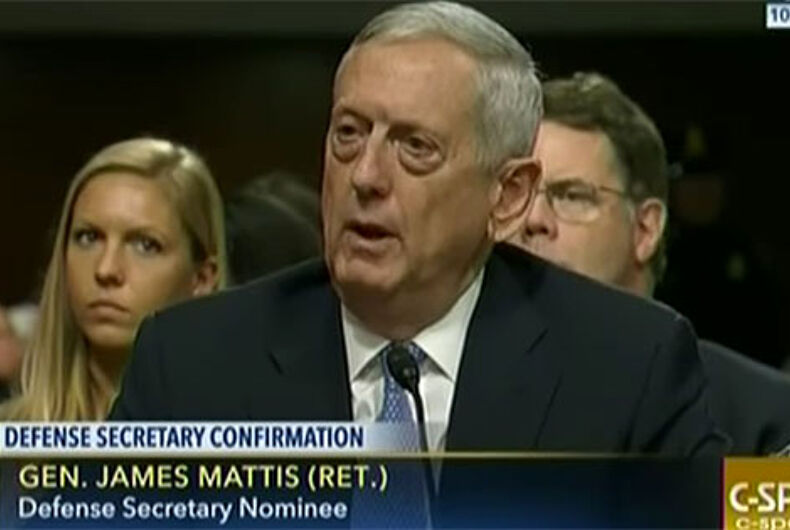 Marine Corps Retired General James Mattis evaded some tough questions Thursday posed by Sen. Kirsten Gillibrand of New York, who supports opening all combat positions in the military to women, gays, lesbians, bisexual and transgender troops. But one thing he did not dodge was whether he’d abide by rules that allow female personnel to fight on the front lines.

“I have no plan to oppose women in any aspect of our military,” Mattis declared, reports Stars and Stripes. He did not directly address transgender military service, but said he had no plans to change existing policies allowing LGBTQ troops to serve openly.

Gillibrand repeatedly try to ask Mattis if he intended to roll back the Defense Department’s decisions to open combat positions to women and the lesbian, gay, bisexual and transgender community.

Mattis had previously stated in 2015 that mixing men and women in combat could create complications because of sexual desires and that such integration had not been successful at any time in history. He also suggested he might abandon combat integration and questioned lifting the ban on transgender troops, criticizing “political correctness” as harming the military.

In answer to Gillibrand’s question about whether he’d changed his mind, Mattis said he would follow policy changes that have been made if confirmed.

“If someone brings me a problem, I will look at it but I am not coming in looking for problems,” he told the senator, saying he had no plans to undo the existing policies, and wasn’t concerned about the sexual orientation of service personnel.

“Do you believe that allowing LGBT Americans to serve in the military or women in combat is undermining our lethality?” Gillibrand asked.

“Frankly, senator, I’ve never cared much about two consenting adults and who they go to bed with.”

Gillibrand has said she’s opposed to a plan to grant a congressional waiver to Mattis for him to become defense secretary. It’s required because of a law that prevents recently retired military officers from serving in senior civilian jobs in the Pentagon.

As the law stands now, retired military personnel must be out of uniform for seven years. The original law was adopted in 1947 and had a 10-year moratorium and was created to ensure that civilians control the military.

The law was changed in 2008, reducing from ten to seven the number of years that a nominee must be retired from the military, but since Mattis retired in 2013, it will need to be amended once again or the general will need a waiver, which Gillibrand remains opposed to granting.