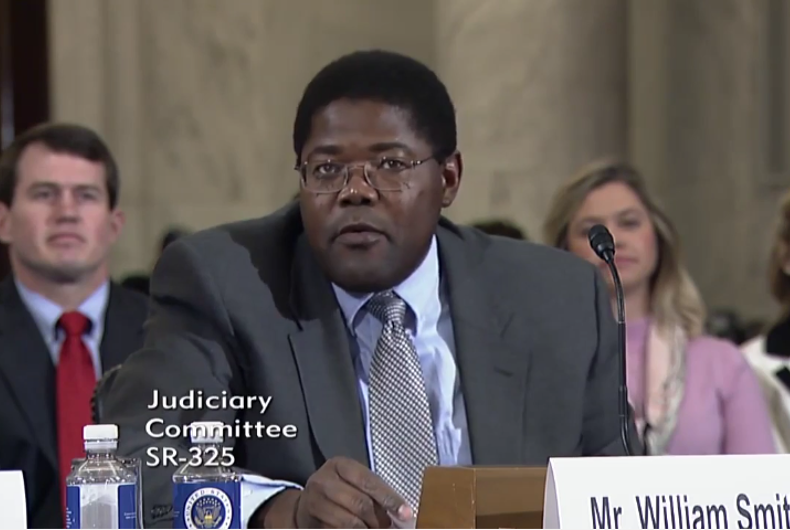 Sen. Jeff Sessions, Donald Trump’s pick for Attorney General, faced confirmation hearings this week and Republicans on the Senate Judiciary Committee invited three supporters of the senator to join the panel and counter those testifying against him.

One such supporter was former Sessions staffer William Smith. Smith, who is currently chief of staff to Rep. Gary Palmer, was named Sessions’ chief counsel in 2009. Legal reporter David Ingram published an article at the time bringing to light a post Smith had written on his blog comparing the LGBTQ rights advocacy group the Log Cabin Republicans with pro-pedophilia group NAMBLA.

The post was in response to Steve Schmidt, a Republican campaign consultant who advised John McCain’s presidential campaign, speaking to the Log Cabin Republicans.

“I wonder if next week Schmidt will take his close minded stump speech to a NAMBLA meeting. For those unfamiliar with NAMBLA, the acronym is for North American Man Boy Love Association,” wrote Smith.

“Schmidt would quickly tell you that he is not advocating that we support 60 year old men in their desire to rape 8 year old boys, but he would not classify his opposition as narrow minded. No! This is a principled position; there is some logic behind it, Schmidt would say,” he continued.

“Is Schmidt then going to take his close minded stump speech to the Bestiality Club? Again, his answer would be no, although there are a group of people who embrace this lifestyle.

“Schmidt and other gay lifestyle proponents would say that my opposition is based on the slippery slope approach. I say that it is based on principle and that it is no more close minded than their position for gay unions. The difference between me and Schmidt is that I’m not a maverick. I’m guided by something called Christian principles. And I don’t need people in California, New York and Washington to tell me what the principles should be.”

The blog, which no longer exists, also included claims that President Barack Obama was not born in the United States.

“President Obama has been very good at covering up the question of whether he was born in the United States,” wrote Smith, “but his cabinet nominees have not found as much success covering up the problems with their backgrounds.”

He then went through a litany of allegations against Obama’s nominees.

“Unfortunately for them, they have not been as successful as President Obama in covering up the flaws in their background,” he concluded.

Watch Smith testify in support of Sessions during his confirmation hearing in the video below.