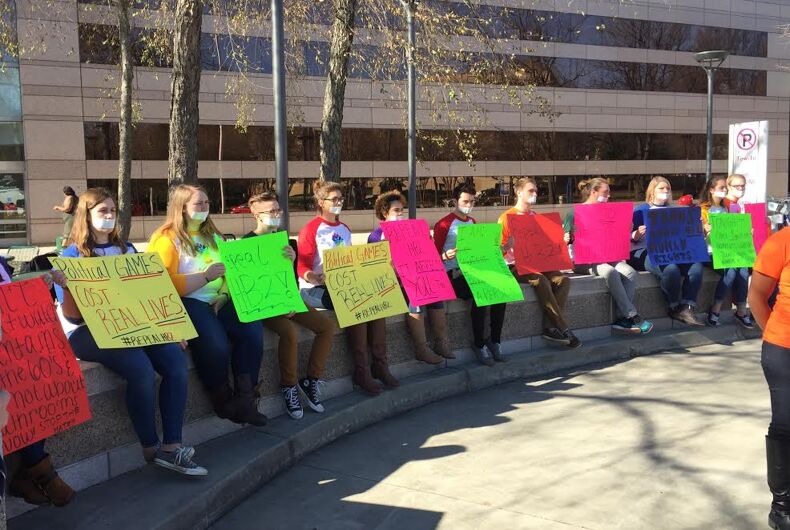 On Wednesday the North Carolina General Assembly came back to Raleigh for a special session with only one purpose, to consider a repeal of House Bill 2 (HB2).

They adjourned for the year without doing so, leaving the harmful law on the books, despite the Charlotte City Council voting to rescind its expanded non-discrimination ordinance as requested by the state.

It appeared as if the economic damage from the boycotts of the state due to the law might finally be enough to encourage lawmakers to repeal. The Human Rights Campaign and the North Carolina chapter of the NAACP are calling on the boycotts to continue.

On Thursday, student activists from the Charlotte-based national non-profit organization Campus Pride turned out to the Government Center with tape over their mouths, signifying that they feel they are not being listened to by local and state leadership.

“I believe that what our lawmakers are doing is just very belittling to us and it is threatening the lives of a lot of people,” Shakira Marshall said.

While Marshall said she had hoped HB2 would be repealed that she is no longer surprised “on the hate and the discrimination” on display in the state.

“We elect you into office and we trust you to keep our best interests at heart, and they’re not doing that,” Marshall said of the Charlotte City Council, suggesting that it might be time to elect new representatives into office.

“Now since Trump is the president-elect, I hope things don’t go more downhill. I feel like that is just going to breed a lot of hate and discrimination,” she continued. “Here in Charlotte, it’s 2016, we have marriage equality but we take that one step forward and three steps back. These laws are just opening up way more discrimination for LGBT individuals. So now it’s legal, that’s the issue.”

Rachel Dean, another student with Campus Pride by way of Michigan, stressed that she hopes when she returns home she can bring what she has seen and learned in North Carolina to the attention of those in the Northeast who may be unaware of the dire situation.

Shane Windmeyer, the executive director of Campus Pride, has stressed the importance of doing advocacy work where it is most needed but admits to conflict surrounding the decision to keep their signature event Camp Pride in the state.

Many have fears over traveling to North Carolina with its current climate of awareness and visibility but no protections, which can create a dangerous situation for trans people. The state has also experienced boycotts, keeping some from attending this year’s Camp Pride event.

Windmeyer said the students at today’s action called for a demonstration to show that there are real lives threatened by HB2 and the hostile climate it has fostered.

“We felt it was important to show with this demonstration visibly, with the tape on people’s mouths, that the local LGBTQ community, particularly the young people’s voices, have been silenced throughout this whole process,” Windmeyer said. “They haven’t been asked the questions. These meetings that happened on Monday and Wednesday (to repeal the Charlotte expanded non-discrimination ordinance), by our city council to barter away basic human protections that over 250 cities in the country have was wrong.”

“They’ve been saying for nine months that they aren’t going to get rid of our non-discrimination ordinance because that wasn’t the problem,” he continued. “It was HB2. And so we want to remind them that…this is about real lives, young people’s lives. We’ve lost trans people in our own community, queer people of color have been harassed and discriminated against in our own community. We can’t forget that.”

He said students wanted to remind people the real loss, beyond economic pain, is the damage it does to “actual lives at stake.”