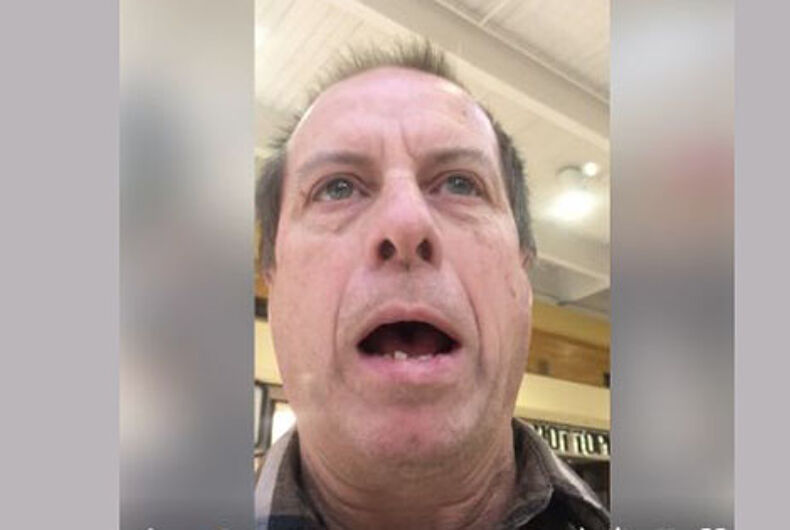 The holidays are a stressful time for anyone, but you really have the cards stacked against you when you’re a militant antigay preacher who has to destroy Christmastime for so many little boys and girls.

Video has surfaced showing one such preacher rising to the occasion this weekend, in a special appearance at an Amarillo, Texas shopping mall, where he took to telling misty-eyed children that Santa Claus is a big fat lie.

In the video, Pastor David Grisham of Alaska casually terrorized parents and children, and said, “I want to tell you today that there is no such thing as Santa Claus. Santa Claus does not exist.”

The Christmas season is about Jesus. Jesus was born 2016 years ago. He was born in a manger in a small town called Bethlehem. That is the truth about Christmas.”

“I’ve got my kids over there, we don’t need you coming over here blabbing whatever it is you’re blabbing,” one father told him. But that and the calls of other parents who told Grisham to keep his preachy pie-hole shut fell on deaf ears.

“The man you’re going to see today is just a man in a suit dressed up like Santa but Santa doesn’t exist,” Grisham said.

“Santa’s not real. And parents you all need to stop lying to your children and telling them that Santa Claus is real when in fact he’s not.”

Parents posted complaints on the Westgate mall’s Facebook page, expressed their outrage and demanding that he be banned from the mall.

The mall emailed the following statement to The Huffington Post on Sunday, promising action:  “We want everyone at our shopping center to have an enjoyable experience,” the statement said. “All of the shoppers are expected to follow our code of conduct and will be asked to leave our premises if they don’t follow these rules.”

And just for the record, LGBTQNation has not confirmed Grisham’s allegation that Santa Claus is not real.