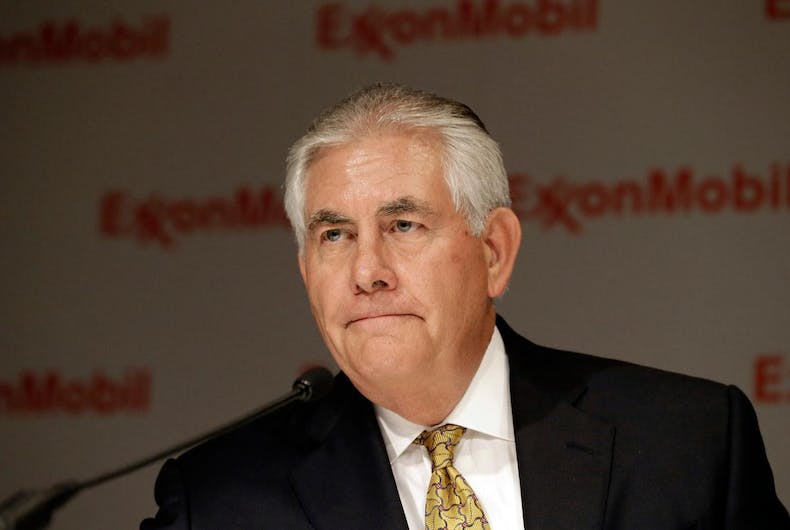 Donald Trump is expected to name Rex Tillerson, CEO of ExxonMobil, as his pick for secretary of state, causing concern among LGBTQ rights advocates.

In 2014, the company’s shareholders voted against offering protections to LGBTQ workers for the 17th time, with less than 20 percent voting in favor.

The company has the ignoble honor as the only company that has received a negative rating from the Human Rights Campaign, earning a negative 25 both in 2012 and 2013. It earned a score of 85 on the HRC’s 2017 Corporate Equality Index.

Chad Griffin, the president of the HRC, has released a statement calling on the Senate to ask tough questions of Tillerson should he be nominated.

“ExxonMobil CEO Rex Tillerson’s nomination raises critical questions as to how a Trump administration plans to protect LGBTQ employees and contractors affiliated with the State Department, and ultimately whether it will continue American efforts to advance equality through U.S. foreign policy,” said Griffin. “Will Trump and Tillerson take on brutal dictators like Putin who have inspired attacks against LGBTQ people? Will they assist LGBTQ Muslim refugees fleeing death from ISIS? For millions of people around the globe, their position on these and other issues are a matter of life and death. These are among the questions that Senators — Democrats and Republicans alike — must ask.”

Tillerson’s ties with Putin and Russia are also troubling, especially coming on the heels of the CIA concluding that Russia interfered with the U.S. elections in order to help get Trump elected.

There is some reason to hold out hope, as Tillerson is said to have been influential in helping end the ban on gay youth joining the Boy Scouts of America, for which he served as president from 2010 to 2012. The ban ended in 2014, with the ban on gay Boy Scout leaders ending the following year.

“I can’t get into the intimacy of these conversations. But he agonized over this. He prayed on it, and ultimately he came to the conclusion the only thing that can guide him here is what’s best for the young boys,” Hamre told The Dallas News. “I think he became a key leader in helping the group come to a consensus.”

Antigay preacher to mall kids: ‘Santa is not real’