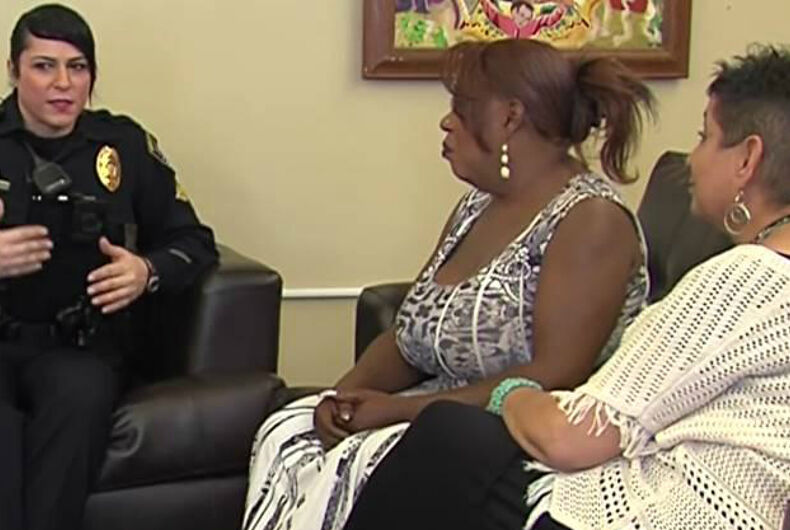 A transgender cop was recently barred from entering the San Diego LGBT Community Center over concerns her police uniform would be upsetting to event attendees at the center.

Christine Garcia, San Diego’s first and only out transgender officer, helped plan the November 17 Transgender Day of Remembrance event and served as a safety escort for a march through the city.

But when the crowd returned to the LGBT center for the remainder of the event, Garcia was denied entry.

City Commissioner and LGBT activist Nicole Murray-Ramirez told the San Diego Union-Tribune that decades of work has gone into improving the relationship between police and the LGBT community and that officers shouldn’t be excluded.

“They’ve really reached out to the community. They’ve gotten to know the community. There are always rotten apples, but on a whole we have progressed greatly,” Murray-Ramirez said. “Any officer, be they gay or straight, should be welcomed into our community center in uniform.”

Center leadership apologized for what they called a “miscommunication” and reiterated that LGBT law enforcement officers are always welcome, in or out of uniform.

“We do not wish to ever make any community member feel unwelcome at The Center – these officers are valued members of our community,” Chief Executive Officer Dr. Delores Jacobs wrote in a statement to San Diego Gay & Lesbian News. ““When they are attending events, they are not here to ‘police’ The Center – though they may be in uniform or on-duty.”

Jacobs said the center respects those who don’t trust police, but said everyone should feel welcome, including uniformed officers.

“After this happened, the entire staff were involved in a series of discussions to clarify The Center’s policy and to discuss ways to support and offer alternatives to community members who continue to be uncomfortable with police officers in uniform,” echoed Chief of Communications for The Center Amber Cyphers.

Is Donald Trump a fascist? Consider these 14 signs.