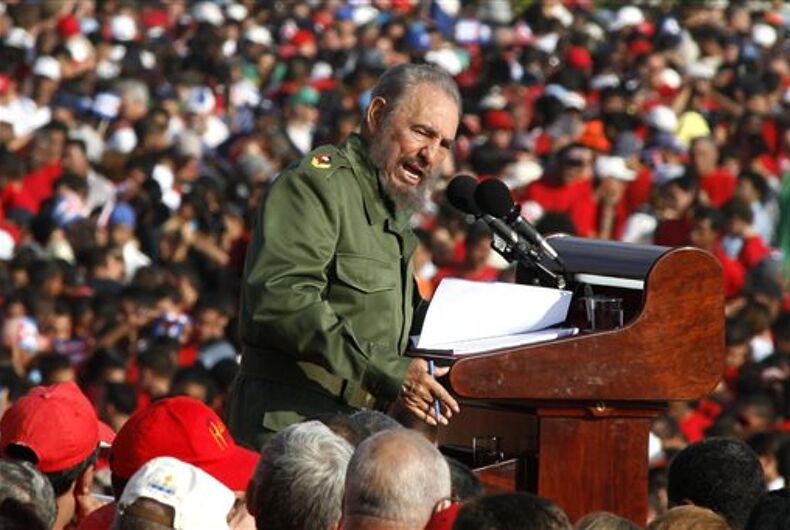 FILE - In this May 1, 2006 file photo, Cuba's leader Fidel Castro speaks on International Workers Day in Revolution Plaza in Havana, Cuba. Former President Fidel Castro, who led a rebel army to improbable victory in Cuba, embraced Soviet-style communism and defied the power of 10 U.S. presidents during his half century rule, has died at age 90. The bearded revolutionary, who survived a crippling U.S. trade embargo as well as dozens, possibly hundreds, of assassination plots, died eight years after ill health forced him to formally hand power over to his younger brother Raul, who announced his death late Friday, Nov. 25, 2016, on state television.Photo: (AP Photo/Javier Galeano, File)

HAVANA (AP) — Fidel Castro’s revolution was slowly dying — or so it seemed.

The title of an American book seemed just right: “Castro’s Final Hour.” That was in 1992.

Castro’s “final hour” became weeks, then months, then years. Even as China and Vietnam embraced free markets, Castro clung to his socialist beliefs and Communism’s supposed dinosaur went on to rule for another decade and a half. Along the way he became godfather to a resurgent Latin American left, mentoring a new generation of leaders: Hugo Chavez of Venezuela, Evo Morales of Bolivia, Rafael Correa of Ecuador.

No other Third World leader prompted so much U.S. hostility for so long. Castro brought the planet to the brink of nuclear war in 1962, sent tens of thousands of troops to aid leftist governments in Africa and nurtured guerrilla movements that fought U.S.-backed governments across Latin America. He endured a crippling U.S. embargo and outlasted 10 U.S. presidents — all of them preaching regime change in Cuba — finally resigning 11 months before Barack Obama moved into the White House, not from U.S. pressure but because of serious illness.

After Castro transferred power to his brother Raul, first temporarily in 2006 and then permanently on Feb. 19, 2008, he survived another eight years in quiet retirement before finally dying on Friday. By hanging on in the shadows, he helped his followers avoid political unrest and ease the island into a communist future without the only leader most Cubans had ever known.

To the end, Castro remained a polarizing figure. For many he was a champion of the poor who along with Ernesto “Che” Guevara made violent revolution a romanticized ideal, a symbol of liberation who overthrew a dictator and brought free education and health care to the masses. To exiles who longed for Castro’s demise he personified a repressive regime that locked up political opponents, suppressed civil liberties and destroyed the island’s economy.

Hundreds of thousands of Cubans began fleeing north almost immediately after Castro’s 1959 revolution as he started turning exuberantly capitalist Cuba into a socialist state, dismaying reformists who thought he meant only to topple thuggish strongman Batista and restore democracy.

The exodus transformed not only Cuba but also parts of the United States, most notably South Florida, which became the center of virulent anti-Castro sentiment. As Cuban exiles gained political strength, they became a bulwark against softening America’s trade embargo against the island. To those whose families were uprooted and saw their properties seized, Castro was nothing less than a tyrant.

But love him or hate him, there was no denying that Castro played an outsize role on the world stage for much of the 20th century, all from his perch on an island smaller than Pennsylvania that had once been better known as a place for gambling and sunbathing.

Castro’s “barbudos,” as the bearded rebels were known, marched triumphantly into Havana days after Batista fled on Jan. 1, 1959. The United States was among the first countries to recognize the new government. But the rebels’ image quickly darkened as impromptu courts sent officials of the old regime to the firing-squad wall.

Castro was outraged at the resulting U.S. criticism, calling it “the vilest, most criminal and most unjust that has been launched against any people.” It was a tone of righteous indignation Castro would return to time and again over the decades, convinced to the end of the justice of his revolution.

Transgender cop blocked from LGBT event she organized due to uniform