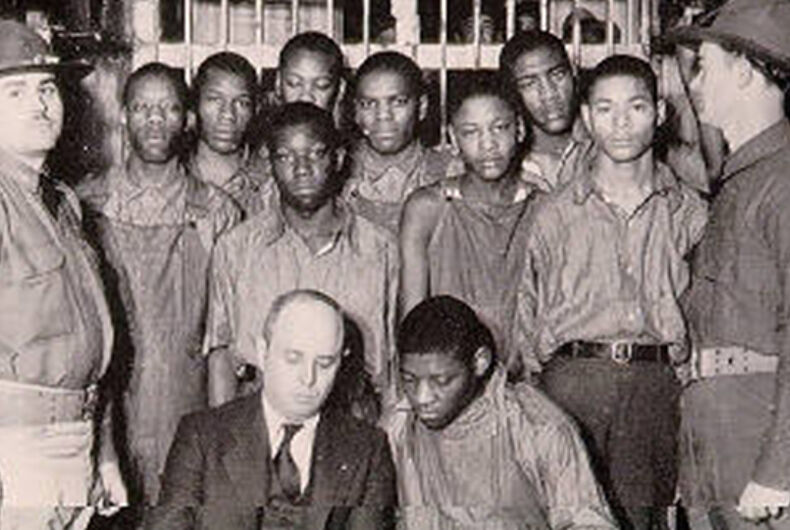 The Scottsboro Boys, with attorney Samuel Leibowitz, under guard by the state militia, 1932Photo: Wikimedia

Broadway legends John Kander and  Fred Ebb’s production of “The Scottsboro Boys” has arrived in my hometown of Boston, running through the end of November in a production by the SpeakEasy Stage Company.

When I was told that the framing devise of the musical is a minstrel show, I was aghast.

Employing a defunct and racist American theatrical form – where black face makeup used by white performers is its signature –  to narrate a horrific travesty of justice, on surface, is not funny nor entertaining.

However, John Kander and his collaborator and lyricist the late Fred Ebb, have pushed theatrical boundaries by subverting the minstrel trope to highlight racism and discrimination in our judicial system.

The trials of the Scottsboro Boys, which ran from 1931 to 1937, is a painful story to revisit, especially in light of today’s continued mass incarceration of young African American and Latino men.

But Kander & Ebb do a brilliant job satirizing the depiction of African American life in the South in “The Scottsboro Boys” that resonates with today’s racial tension no matter where a black person resides in relations to the Mason-Dixon Line.

The Scottsboro Boys lived during the time of the minstrel shows popularity, performed by both black and white actors. However, while white blackface minstrelsy and black minstrelsy shared the same structural art form they differ vastly in meaning and intention.

White blackface minstrelsy was both intentionally and offensively racist whereas black minstrelsy turned racial caricatures on their heads to highlight their absurdity with subtle cultural markers and movements with nuanced and coded messages intended for black audiences only.

“I thought, let’s tip that over and have them play stereotypical white characters,” David Thompson, librettist of the show told Playbill. “In the show, Bones and Tambo play cartoonish interpretations of racist, white law enforcement officers and lawyers ” by black actors, he said.

For many the Scottsboro boys trials are long forgotten, and their lives once exonerated were never repaired in the form of reparations.

The Scottboro Boys is about the imprisonment of nine teenage boys, ranging in ages from 12 to 19, falsely accused of raping two white women, a repeated racial trope in American history.

The 1955 lynching of 14 year-old Emmett Till of Chicago in Money, Mississippi for purportedly flirting with a white woman catapulted a new strategic and more expressive phase of protest in the Civil Rights Movement.

In 1989, The Central Park Five trial falsely imprisoned five black and Latino teenagers for savagely raping  (called “wilding” at the time) a white female jogger, a Wellesley College graduate who was then an investment banker at Salomon Brothers.

Republican presidential candidate Donald Trump took out a full-page ad in the Daily News calling for the reinstatement of the death penalty in New York in response to the case.

The historic event that catapulted a new strategic and more expressive phase of protest in the Civil Rights Movement  motivated by the Scottsboro Boys trials was the 1955 lynching of 14-year old Emmett Till of Chicago in Money, Mississippi for purportedly  flirting with a white woman.

The Scottsboro Boys trials is one of the early historical antecedents that began to examine the systematic ways America’s penal system harm and disadvantage individuals based on race and class.  In The New Jim Crow: Mass Incarceration in the Age of Colorblindness, Michelle Alexander introduces readers to the phenomenon of mass incarceration in the U. S. stating it’s “the most pressing racial justice issue of our time.” And, the Black Lives Matter movement has broadened the conversation about state violence by campaigning against police brutality and highlighting ways in which people of African and Latino descent are intentionally left powerless at the hands of the state, as was the case for the Scottsboro Boys.

“Certainly there are parallels to be drawn between this infamous episode in American history and events we see unfolding today, perhaps even more so now than when the show debuted on Broadway in 2010,” stated Paul Daigneault, SpeakEasy founder and producing artistic director.

Kinder and Ebb’s use of satire is brilliant in “The Scottsboro Boys” because it doesn’t sanitize difficult issues in society from which we’d rather avert our eyes. But rather “there’s a wonderful tension in the theater because audiences are not really sure how they’re supposed to react to the number,” Thompson stated.

This sort of tension is also seen in their musical  production of “Chicago,” a vaudevillian- style performance set in the Jazz Age satirizing crime and corruption, and “Cabaret” which satirizes anti-Semitism in Germany during the Weimar Republic.

I held my breath through much of “The Scottsboro Boys” because I was told about those teenagers  – Olen Montgomery, Clarence Norris, Ozie Powell, Willie Robertson, Charlie Weems, Eugene Williams, Andy Wright, and Leroy “Roy” Wright – while growing up in segregated Brooklyn in hushed tones of fear and sadness.

But at the end of the performance, I got up from my seat and applauded the performers, Kinder and Ebb, and nine boys whose story was finally told with dignity and justice.

Who would think it would come from a minstrel show?

A lesbian comes out to her grandmother, ’50 First Dates’ style: over and over